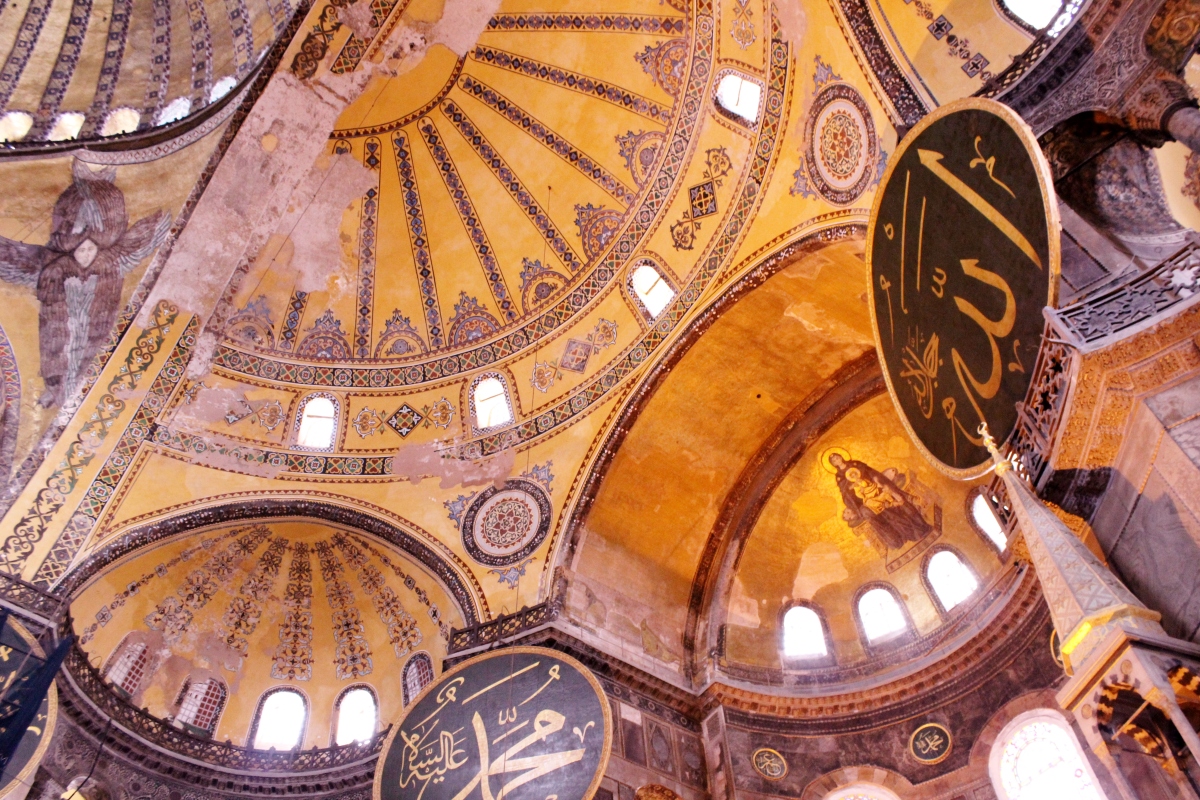 In 324 A.D., mere months after becoming the sole ruler of the eastern and western Roman Empire, Constantine I began making plans for a new imperial residence on the Bosphorus Strait. Within six years, Constantine’s New Rome—or Constantinople—would become the capital of the eastern Roman Empire. And this flourishing epicenter of culture and Christianity would serve as one of the emperor’s most lasting accomplishments.

Although the sun would soon set on the Roman Empire, Constantinople lived on as an imperial capital for nearly sixteen centuries more. By 1453, after a millennium of Byzantine rule, Mehmet the Conquerer would claim the city in the name of the Ottoman Turks, and for nearly 500 years, sultans would rule in the place of emperors. By 1930, Constantinople’s transformation was complete, as the secular Republic of Turkey adopted the Turkish “Istanbul” as the city’s sole name.

Today, Istanbul remains a gateway between east and west; a transcontinental city that straddles Europe and Asia. And with such a rich past—and a vibrant, thriving present—to explore, it’s no wonder that nearly 12 million foreign visitors made their way to Turkey’s largest city in 2012 alone.

So get packing. We’re heading to Istanbul (not Constantinople) for the next three days.

It’s A Beautiful Day In The Neighborhood

With borders that encompass nearly 2,063 square miles, Istanbul’s first-time visitors may (understandably) find the question of accommodations a bit daunting. The good news? The perfect neighborhood awaits in bohemian Cihangir, a tourist-free enclave of modern, artistic, and food-loving Beyoğlu. And while your walk home may often be uphill, the panoramic sea views from your AirBnB rental are well worth the effort.

Jason And The Golden Horn

Enjoy the morning scenes of Cihangir from the terrace of Café Fîruz, a favorite among locals for Turkish tea and simits—a crisp and doughy sesame bread Istanbulites have enjoyed since the 16th century (Defterdar Yokuşu 5). And it’s only a short downhill walk to the northern bank of the Golden Horn, the deep Bosphorus inlet separating Beyoğlu from the city’s historic peninsula.

Your walkway into the past is the sky blue Galata Bridge, the fifth structure that has guarded the Golden Horn since 1845. Centuries earlier, it was Leonardo da Vinci who first proposed plans for a bridge at the current location, but his unprecedented single span design failed to win approval from the sultan. Today, the bridge makes for a popular early evening stroll, as the setting sun bathes the city in light.

Between the years of 532 and 537, the Byzantine Emperor Justinian oversaw the construction of a grand Eastern Orthodox cathedral, dedicated to the holy wisdom of God. For nearly a thousand years thereafter, the Hagia Sophia—or Church of the Holy Wisdom—was the world’s largest cathedral; its massive dome and exquisite design said to have changed the course of architectural history.

But here’s where the story gets interesting. In 1453, after the Ottoman Turks successfully captured the city, Mehmet the Conqueror summoned an imam to proclaim the Islamic creed, transforming the cathedral into a mosque. Minarets were constructed, holy relics removed, and mosaics depicting the Holy Family hidden behind plaster. But by 1935, the mosque was transformed yet again—this time into an awe-inspiring museum of Istanbul’s layered history (Sultanahmet Park).

In 1609, the 19-year-old Sultan Ahmet I set out to build a namesake imperial mosque, a monument to Islam to rival the nearby Hagia Sophia. The result was the Sultan Ahmet “Blue” Mosque, so nicknamed for the 20,000 predominantly blue tiles that adorn its interior. But before you go inside, take note of the mosque’s six minarets—a scandalous design element criticized at the time for mimicking the Grand Mosque in Mecca, which then added a seventh minaret (Sultanahmet Park).

Lions For Lambs (And Veal)

As a neighborhood that is (rightfully) stampeded with visitors in the peak of summer, it seems inevitable that dining near Sultanahmet would be a tricky affair. But if you’d like to avoid overpriced, underwhelming cuisine, reserve a table at Paşazade Restaurant, a beautiful outpost of traditional Ottoman cuisine. The service is generous and the outdoor terraces lovely and atmospheric, but it’s the food—namely the flavorful minced lamb and veal kebabs—that will keep you coming back (İbn-i Kemal Caddesi 5). 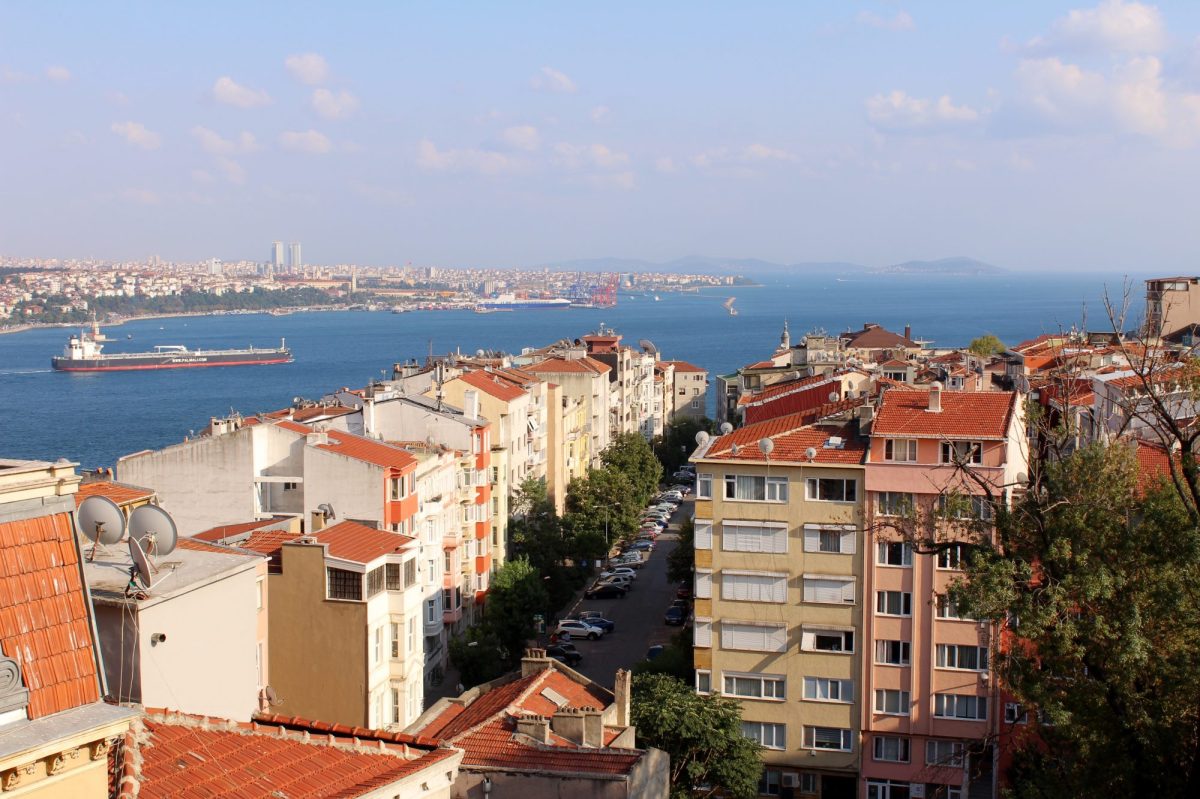 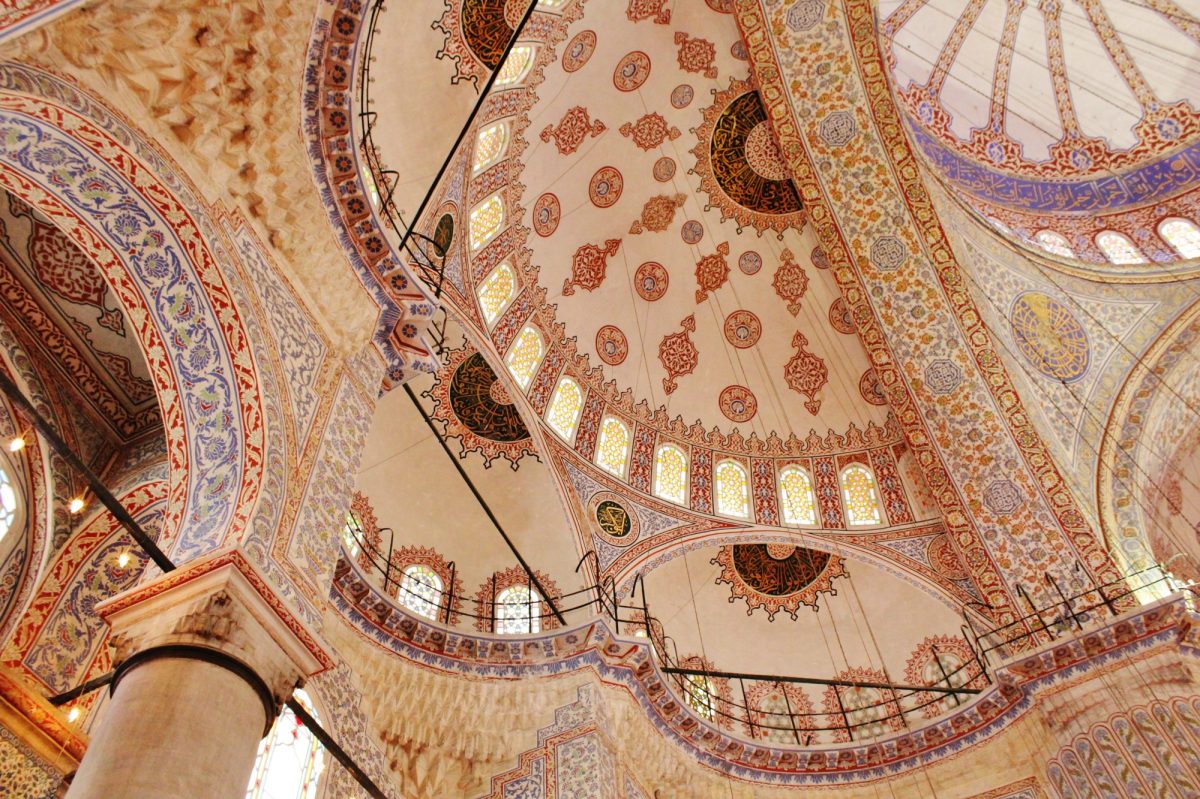 The Sultan Of Swat

Do yourself a favor by arriving early at the Topkapi Palace, before enormous crowds descend on the complex that housed the Ottoman sultans for nearly 400 years. Built by Mehmet the Conquerer over the ruins of Constantine’s Imperial Palace, the Topkapi Palace is an engaging collection of beautifully tiled chambers and vast displays of riches and holy relics (including the hair, tooth, and Holy Mantle of Muhammad). Just don’t miss out on a stroll through the harem, at turns both a gilded and bleak prison for as many as 800 concubines at a time.

Regroup with a picnic lunch under the shaded canopies of Gülhane Park, a former outer palace garden-turned-lovely pedestrian promenade. And just around the bend below the northern palace walls, a glass of afternoon tea comes with stunning Bosphorus views at Set Üstü Çay Bahçesi.

Two visual spectacles await you this afternoon; the first a mere five hundred feet southwest of the Hagia Sophia—and 52 steps underground. The Basilica Cistern, constructed by Justinian in the sixth century, is the largest of several hundred ancient cisterns that lie beneath the city. Supported by 336 marble columns—including two that bear the head of Medusa—this eerie subterranean chamber was capable of holding 2.8 million cubic feet of water for periods of drought or siege (Yerebatan Caddesi).

The second stop you’ll share with as many as 400,000 other daily visitors, but it’s the chaos that makes Istanbul’s Grand Bazaar so entertaining. A vast collection of over 4,000 shops, 65 streets, two covered markets, and countless aggressive salesmen, the Grand Bazaar is stressful, cramped, and wonderfully fun—often in the span of just a few minutes (Beyazit tram stop).

On the northern end of the Galata Bridge, the commercial and transit hub of Karaköy is one of Istanbul’s oldest and most historic districts. But since 2010, it has also been home to chef Didem Senol’s modern neighborhood bistro Lokanta Maya, a treasure house of contemporary, seasonal Turkish cuisine. You’ll have a hard time narrowing down the simple and delicious menu offerings—just know that the zucchini fritters are so popular, Senol appeased her customers by writing the recipe on the dining room mirror (Kemankeş Caddesi 35). 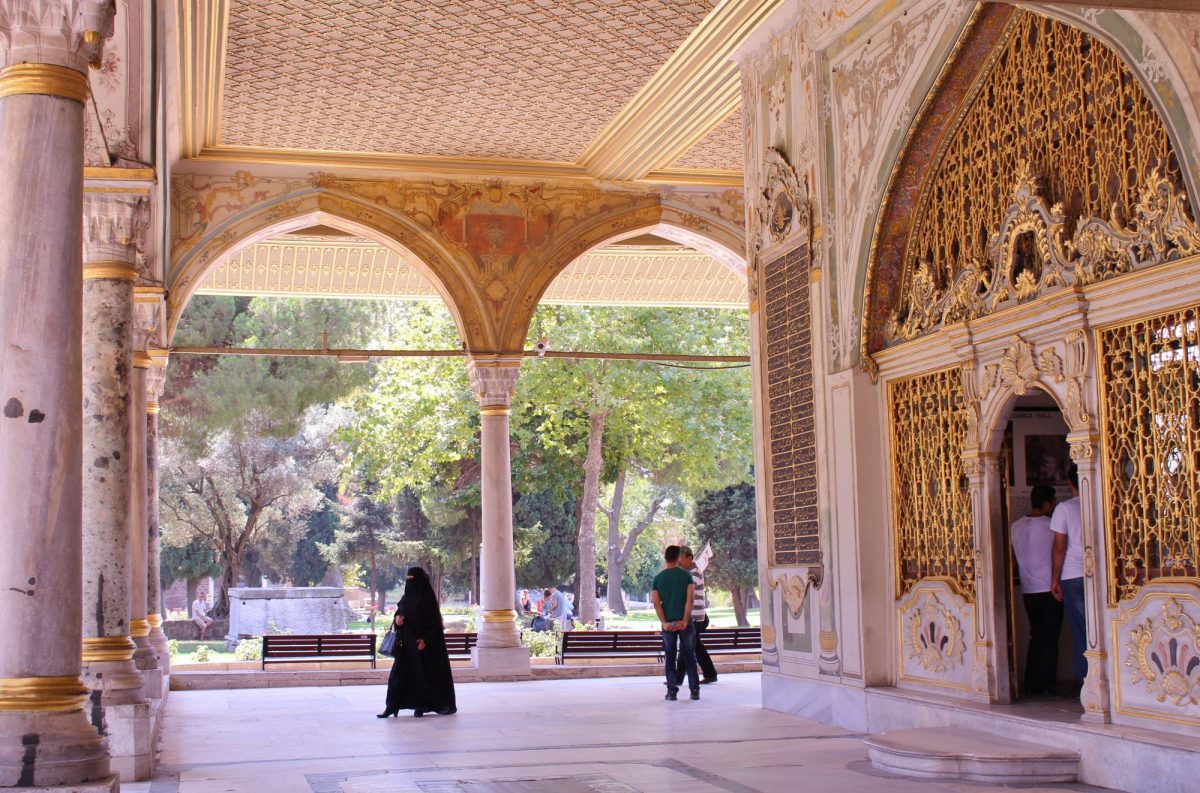 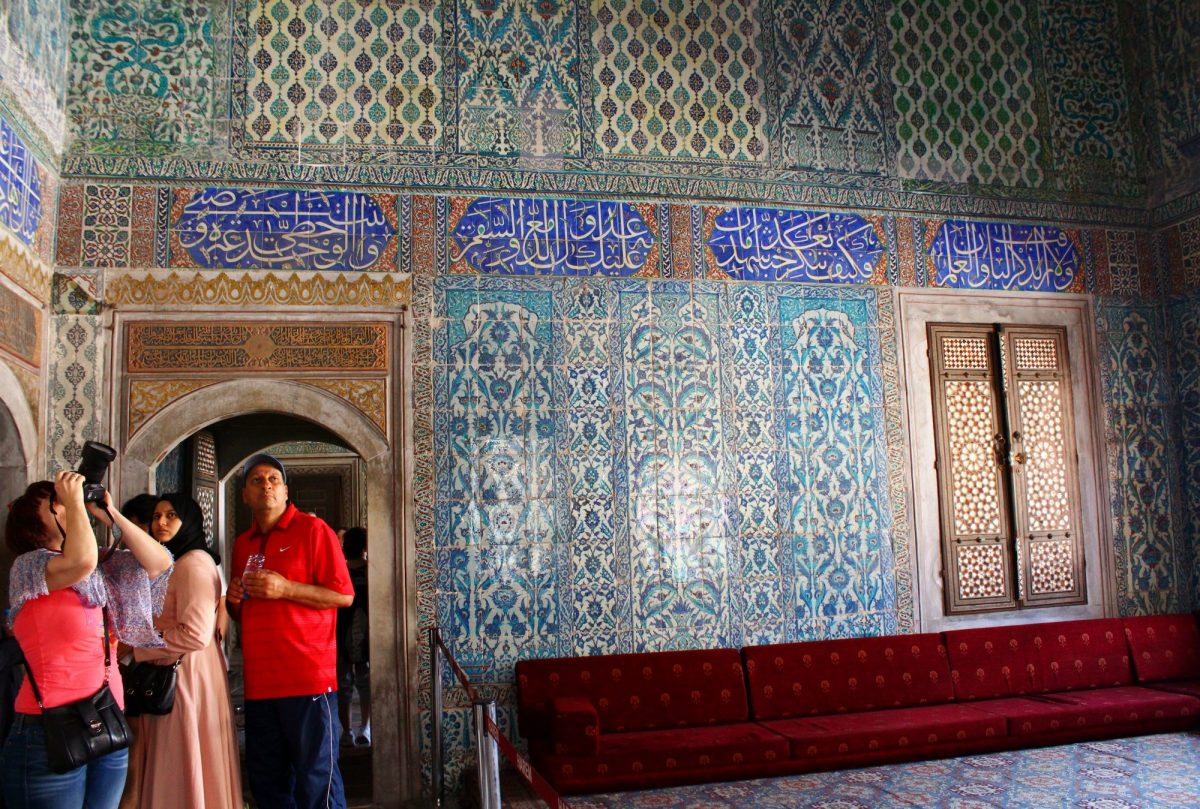 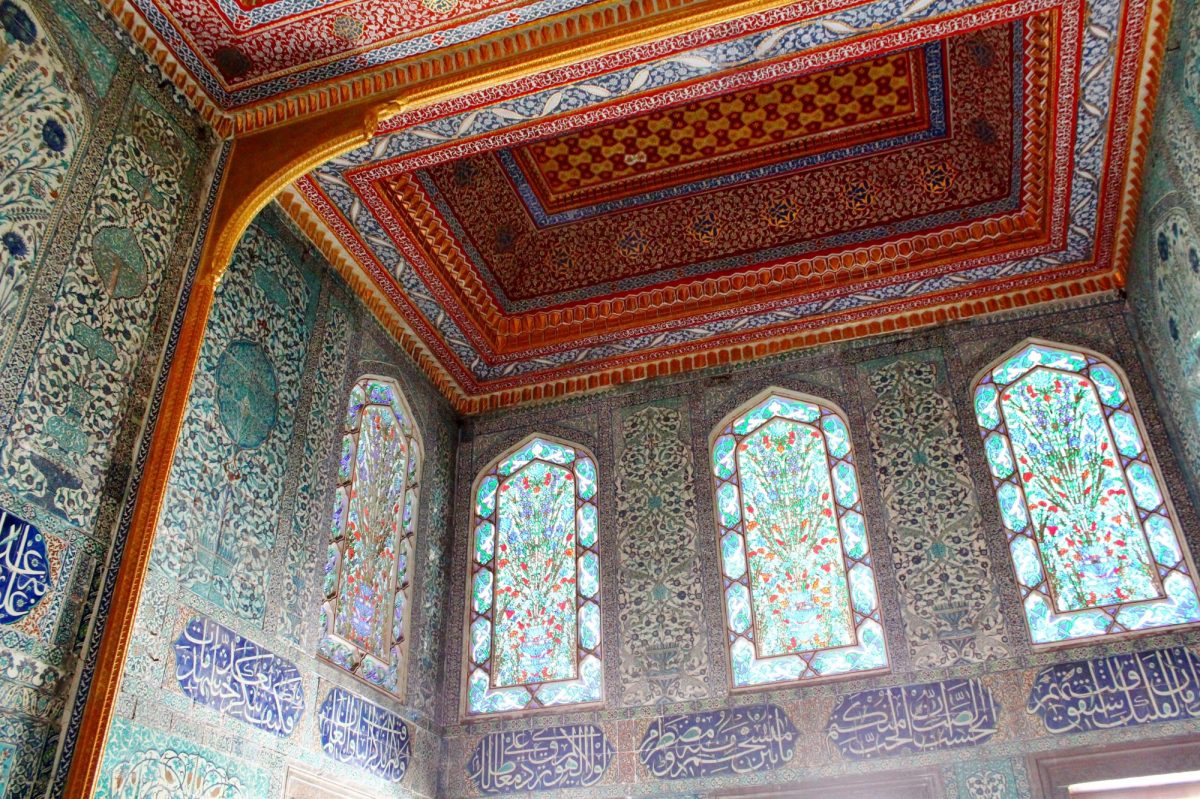 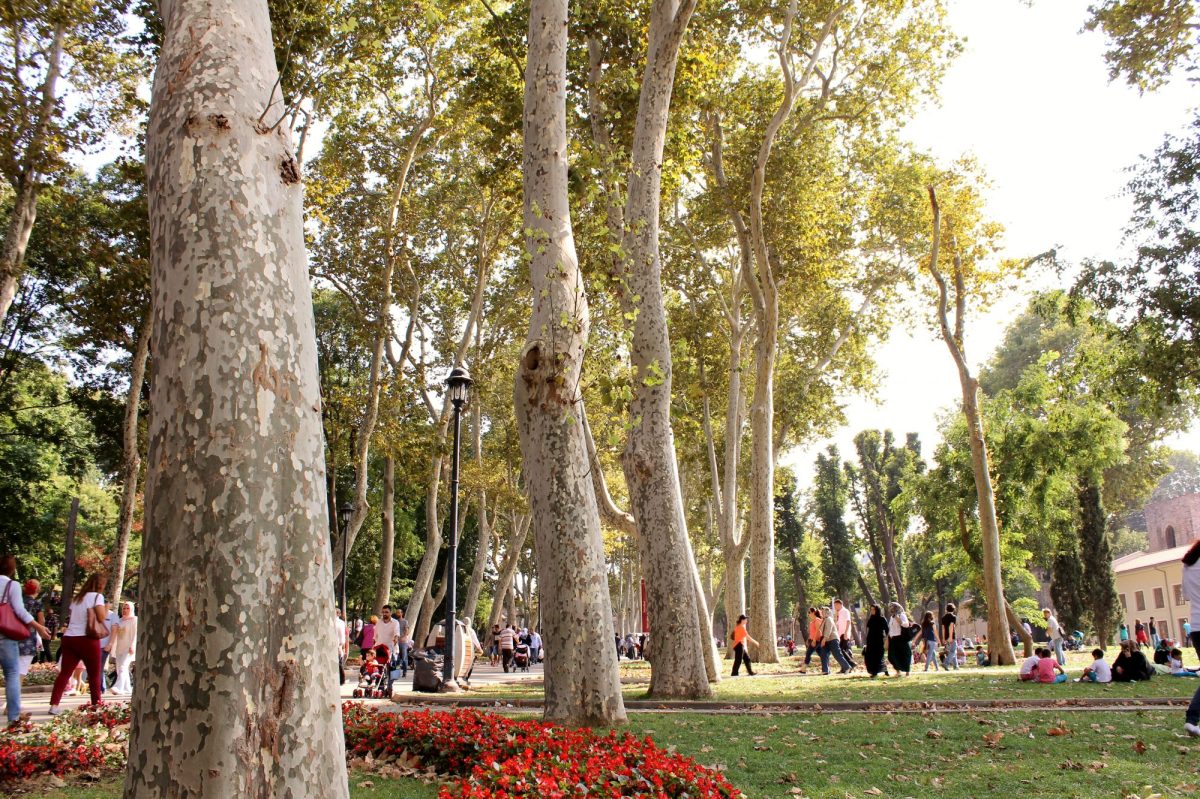 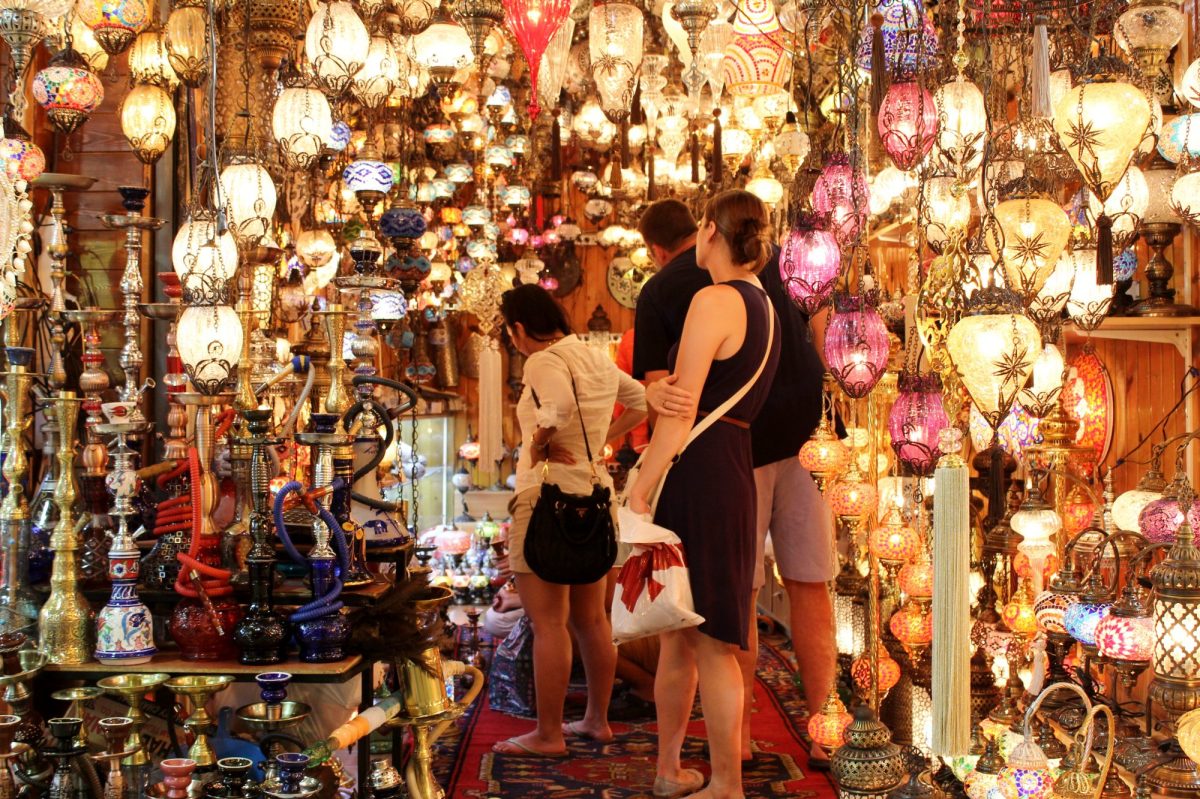 After spending two days immersed in Istanbul’s past, come back to the future with a morning shopping excursion of modern-day Beyoğlu. Beginning in Taksim Square, follow the crush of human traffic along the İstiklal Caddesi to Robinson Crusoe 389, a star among the city’s bookshops with a wide variety of English-language titles (İstiklal Caddesi 195A). As the avenue slopes downward into Galata, keep your eyes open for Serdar-ı Ekrem Sokak, a pedestrian-friendly thoroughfare dotted with creative boutiques. The designer clothing, jewelry, and furniture at Atelier 55 are not to be missed (Serdar-ı Ekrem Sokak 55), nor are the charming books and gifts at Magnolia Culture on Luleci Hendek Caddesi.

And maybe it’s just the writer in me, but I find it hard to resist notebooks, journals, and stationery, especially when the brand is local and more than 100 years old. As you enter Karaköy, pop inside Ece Ajandasi to experience a little piece of Turkish history on paper (Necatibey Caddesi 30). And just down the street, a prime outdoor seat at Karabatak Café is the perfect perch for breaking in your new journal (Kara Ali Kaptan Sokak 7).

Cruisin’ On A Sunday Afternoon

It’s one of the world’s busiest waterways, as the link between the Mediterranean and Black Seas. But more importantly, the Bosphorus Strait offers unforgettable views of both Europe and Asia for those wise enough to take an afternoon cruise. As you’ll quickly learn, there’s no shortage of tour outlets and pestering salesmen advertising boat trips that travel as far as the Black Sea. So save yourself the headache by hopping on Turyol’s peaceful 90-minute cruise that departs throughout the day—and at only 12 TL, it’s one of the best deals in town (departures from Eminönü on the southwest side of Galata Bridge).

Tip a glass to your final evening in Istanbul at the base of Galata Tower, the beautiful stone structure built by the Genoese in 1348. Used by the Ottomans to spot fires throughout the city, the building was, interestingly enough, severely damaged by fires in both 1794 and 1831. But today, it’s the lovely backdrop for a pre-dinner glass of wine at Güney Restaurant (Kuledibi Şah Kapisi Sokak 6).

The walk back to Taksim Square is uphill, but that’s the price you pay for the wonderful dinner that awaits. Istanbul is a city full of kebabs, but Zübeyir Ocakbaşi does them superbly. It’s a charming, unassuming place, the star of which is the ocakbaşi—the long hearth in the center of the dining room, where simple, delicious meats are grilled over hardwood coals. And if you listen to me about one thing, let it be this: the roasted eggplant meze is to die for (reservations essential, Bekar Sokak 28). 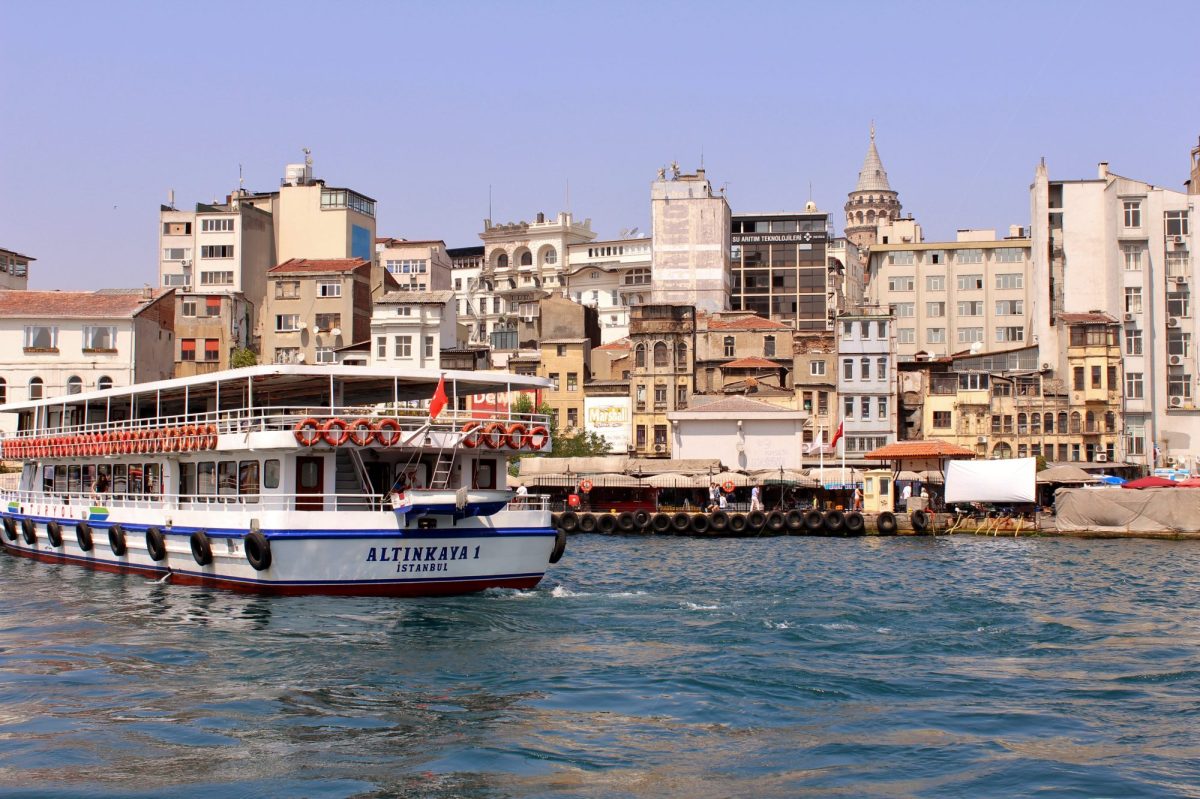 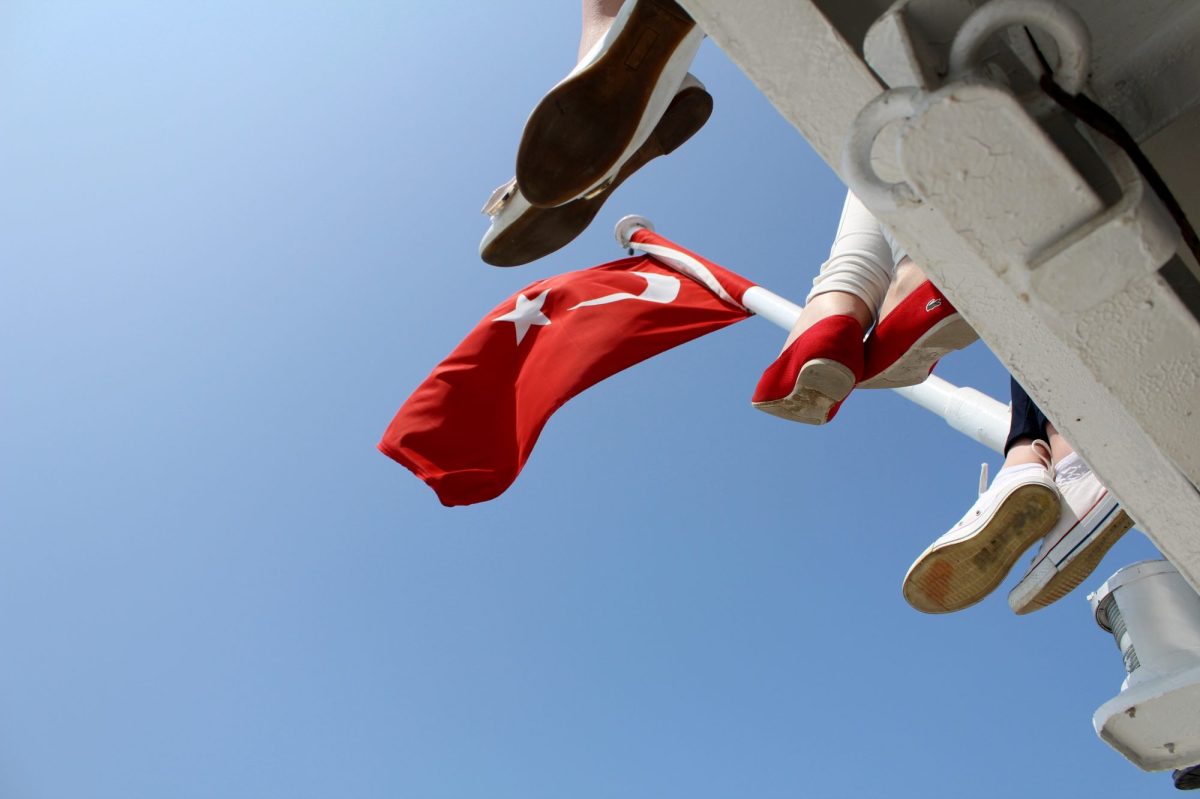 Leave a Reply to Good Morning Istanbuuuulllll! | One Foot in Europe Cancel reply