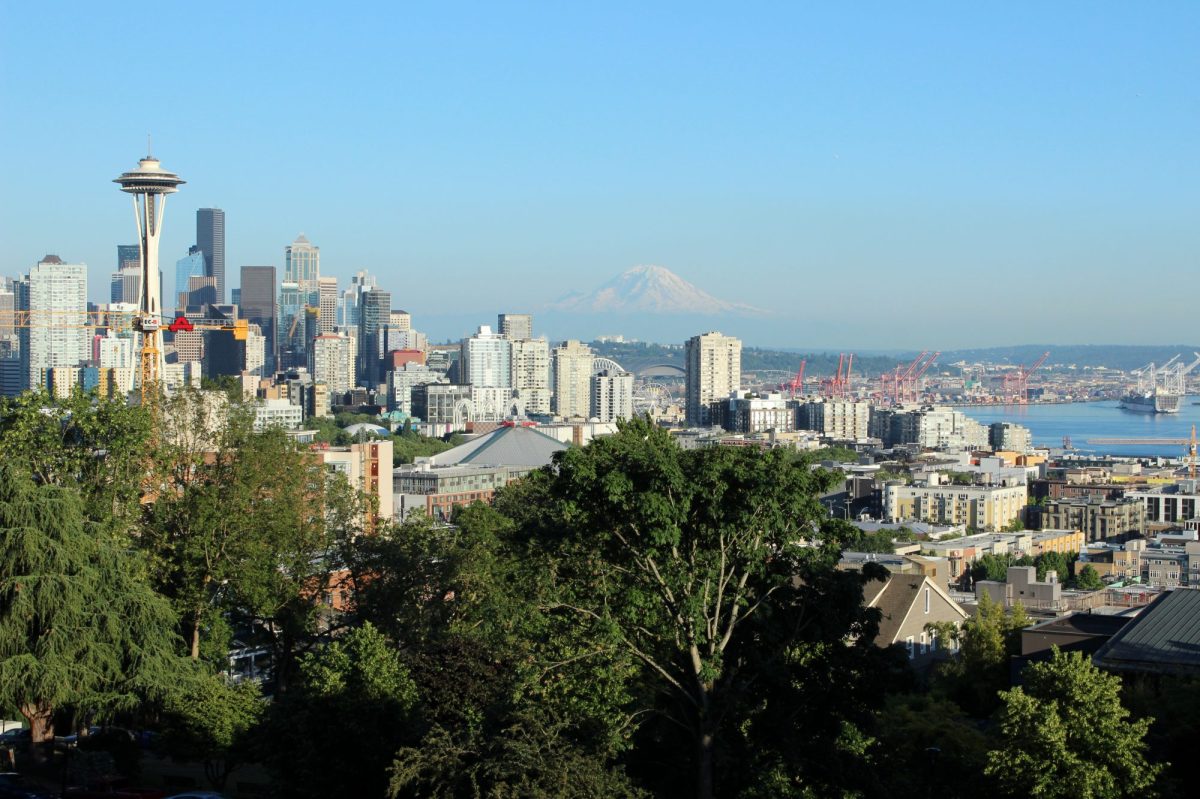 Like so many adolescents who reached their formative years in an era of grunge, my introduction to Seattle came through music. I first heard its beauty in the voice of Chris Cornell, and I felt its darkness and melancholy in Kurt Cobain’s anguished howl. The city was strangely captivating for a place I’d never been—sparkling blue in summer, misty gray all winter, and the source of so much that channeled my teenage emotions.

More than two decades have passed since then, but Seattle still draws me in as much as ever. And now that I’ve climbed its hills, skipped stones on its shores, and seen Mt. Rainier aglow in the setting sun, I’m beginning to understand why. It’s the way the city feels old in all the right ways, and new and creative in so many others; how it can be gritty and raw at one turn, and impossibly pristine at the next.

So dig out that flannel or come as you are. We’re decamping to the Emerald City for the next three days. 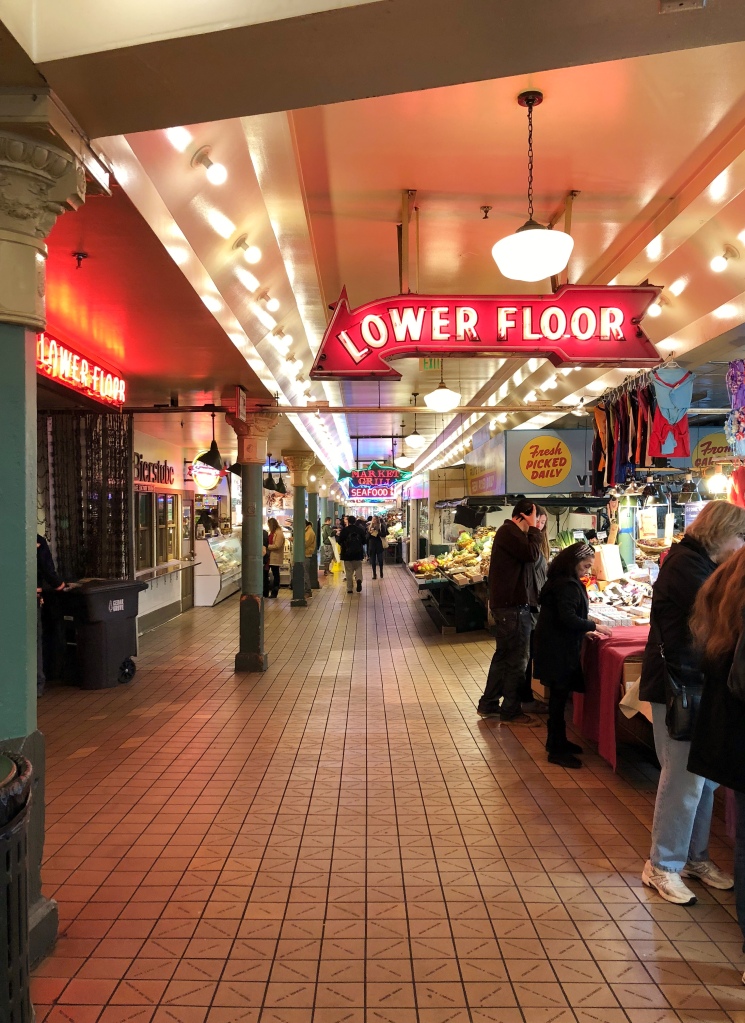 The air is thick with history on the streets of Pioneer Square, a district of shaded avenues, grand 19th century architecture, and Seattle’s original downtown. Since its birth in 1852, this neighborhood has experienced ups and downs—rebuilt after the Great Fire of 1889, teeming with Alaska-bound “stampeders” during the Klondike Gold Rush, and left to become a notorious Skid Row for much of the 20th century.

In recent years, Pioneer Square has found its stride once more. Punctuate your morning with something caffeinated at Elm Coffee Roasters, something beautifully plated at The London Plane, and—if you stick around until lunchtime—something deliciously indulgent at Salumi or Il Corvo. The former’s classic Italian sandwiches make the perfect picnic in Occidental Square; the latter’s housemade pastas draw lines that wrap around the block.

In need of a post-meal stroll? Head north on First Avenue to find some retail therapy at Moorea Seal, a glass of wine in full French style at Le Pichet, and everything from flowers to flying fish at the iconic Pike Place Market.

Insider Tip: If you’re serious about shopping at Pike Place, go early. By late morning, the interior halls are a human traffic jam.

Into The Flood Again

If you’ve ever spent time in the Pacific Northwest, you’ll know that Washington’s ferries are both a regular part of coastal living and a beautiful thrill that never gets old. The same can be said for the 15-minute journey on the West Seattle Water Taxi, which glides between downtown and Seacrest Park with the skyline in rear view. Hop off the boat for a waterfront picnic at the Hawaiian-Korean Marination Ma Kai and a glorious late afternoon walk to Alki Beach, where Chief Seattle first greeted the region’s white settlers in 1851. 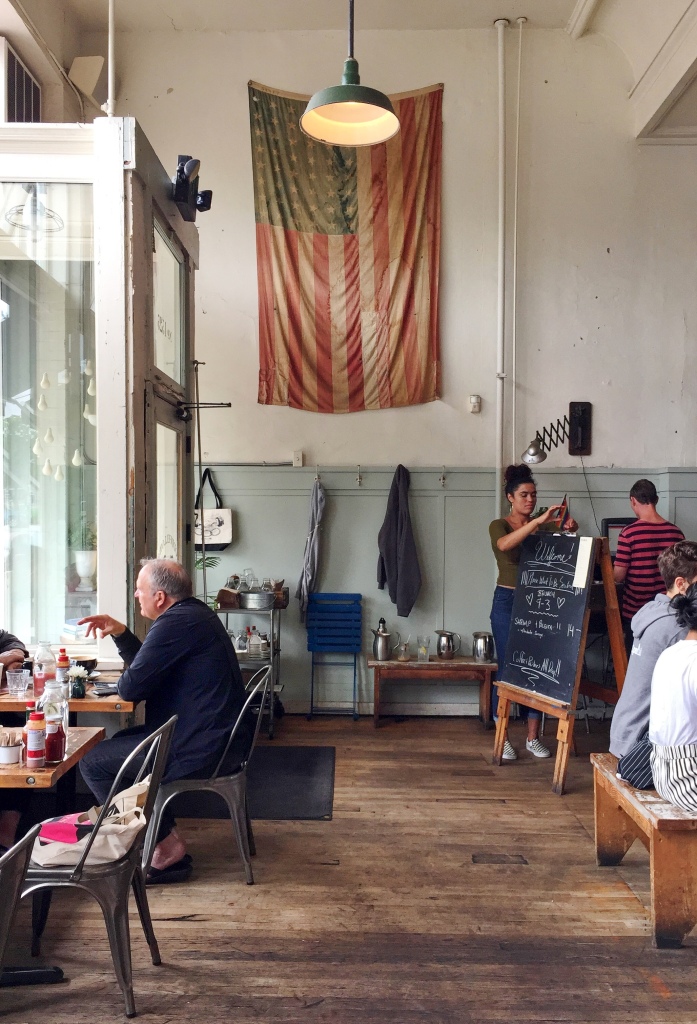 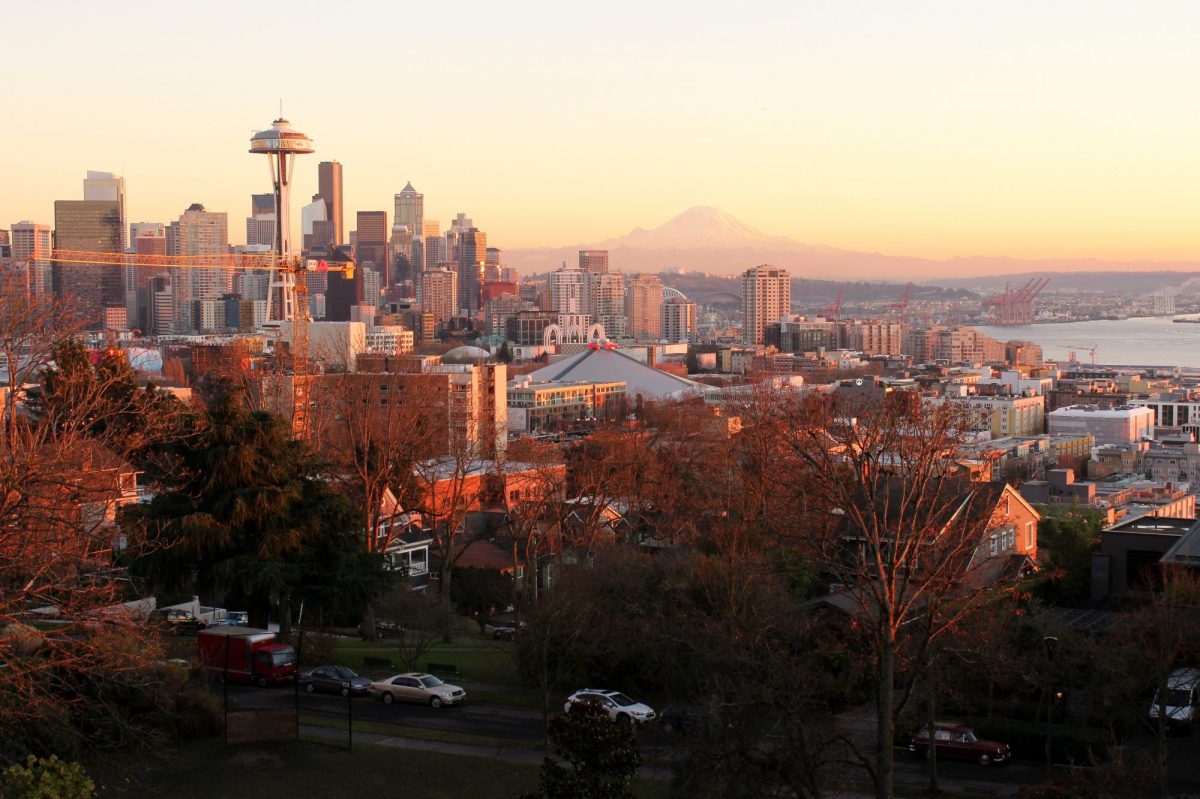 Feel The Rhythm With Your Hands

It’s a curious name, Capitol Hill, in a city that has never held Washington’s state government. Whether the name arose from wishful planning or a nod to a district in Denver remains disputed; more certain is the colorful, urban energy that defines the neighborhood today.

Whether you’re looking for live music, eclectic dining experiences, or a hub of LGBTQ life, it can all be found in a day on Capitol Hill. Begin with the most classic of Seattle breakfasts at Oddfellows Café + Bar (other favorites are the ever-stylish Sitka & Spruce and Tallulah’s) and some morning shopping at Glasswing, Totokaelo, and Elliott Bay Book Company. Grab an afternoon pick-me-up in the form of custard-filled heaven at General Porpoise Doughnuts or plant-based ice cream at Frankie & Jo’s, and walk it all off in the 48-acre Volunteer Park.

Come dinnertime, you can delight in the French-Vietnamese flavors at Stateside or sit down for a delicious lesson in steak at Bateau, where cuts are sourced daily and crossed off the board as they sell. Or maybe you’re catching a show at the Paramount Theatre and just want a late-night burger at Li’l Woody’s.

No matter what, my favorite ending to this day includes a scoop of Scout Mint from Molly Moon’s Homemade Ice Cream, a quick ride to the hilltop hamlet of Queen Anne, and a seat atop Kerry Park with the best skyline view in the city. 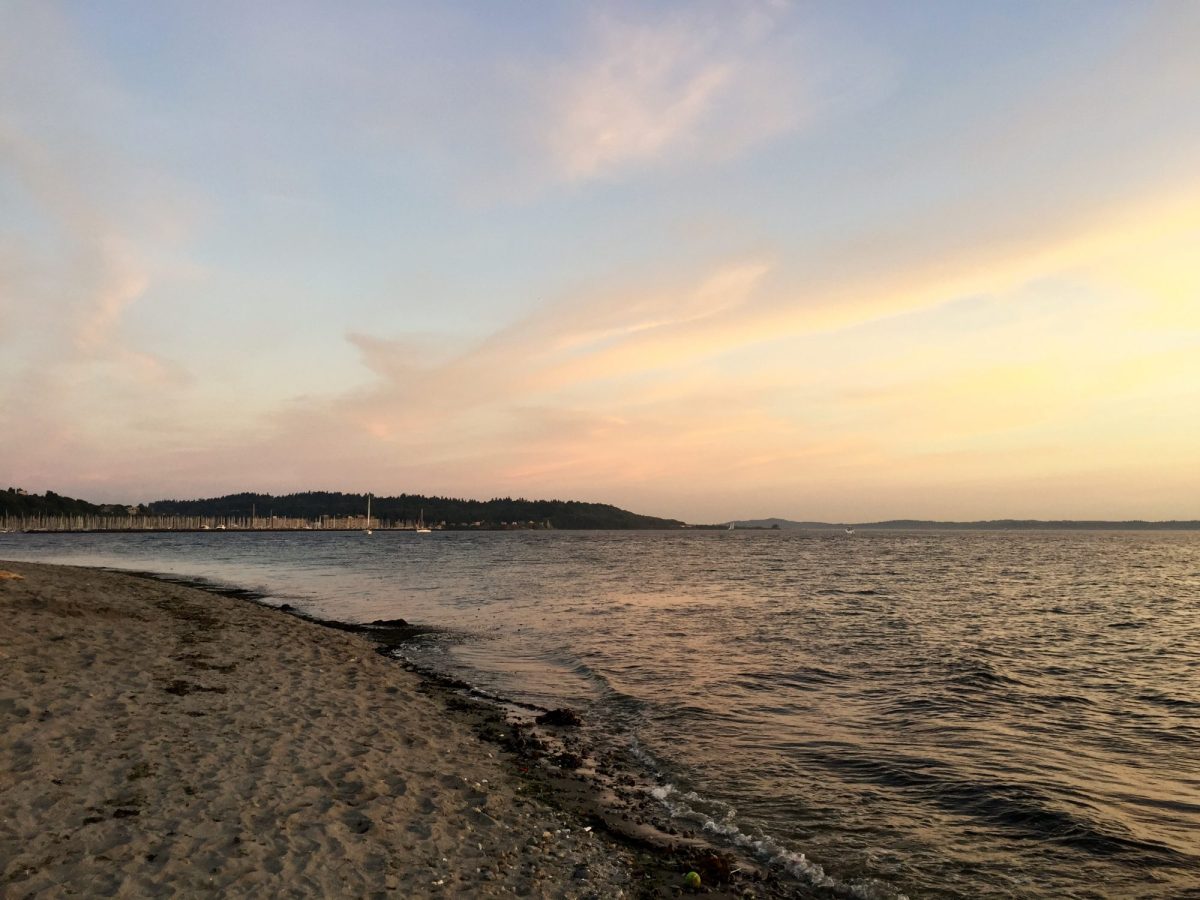 In That Dream, I’m As Old As The Mountains

With the Olympic Mountains and Puget Sound to the west, and the Cascade Range and Lake Washington to the east, Seattleites go to work, sit in traffic, and live their daily lives amidst wonders of nature. But few places excite the senses more than Discovery Park, where 534 acres of meadows, cliffs, and beaches are protected as Seattle’s largest city park. For the perfect morning hike, leave your car in the south parking lot and follow a combination of the Loop and South Beach Trails. You’ll soon come upon the West Point Lighthouse at the tip of South Beach, perfectly framed by snow-capped mountains.

Once its own independent city of mill workers, fishermen, and boat builders of Scandinavian heritage, the Ballard area was absorbed by Seattle in 1907. Today, this neighborhood north of Salmon Bay retains much of its town-like, maritime character, which you’ll feel as you sit down for baked eggs at The Fat Hen, stroll the Sunday farmers market, and pop in and out of Prism and other darling shops.

This area is seemingly made for aimless Sundays, whether you continue a few miles north to the pebble beach at Carkeek Park or sidle a bit eastward to wander through Fremont on the shores of Lake Union. And you’d be wise to make a day of it, especially when dinner awaits in the form of wood-fired pizzas at Delancey, fresh oysters at The Walrus and the Carpenter, or the chef’s selection of Lebanese-inspired plates at Café Munir.

Just be sure to end the evening and the weekend at Golden Gardens Park, whose name offers a lovely hint for the sunset that lies in store. 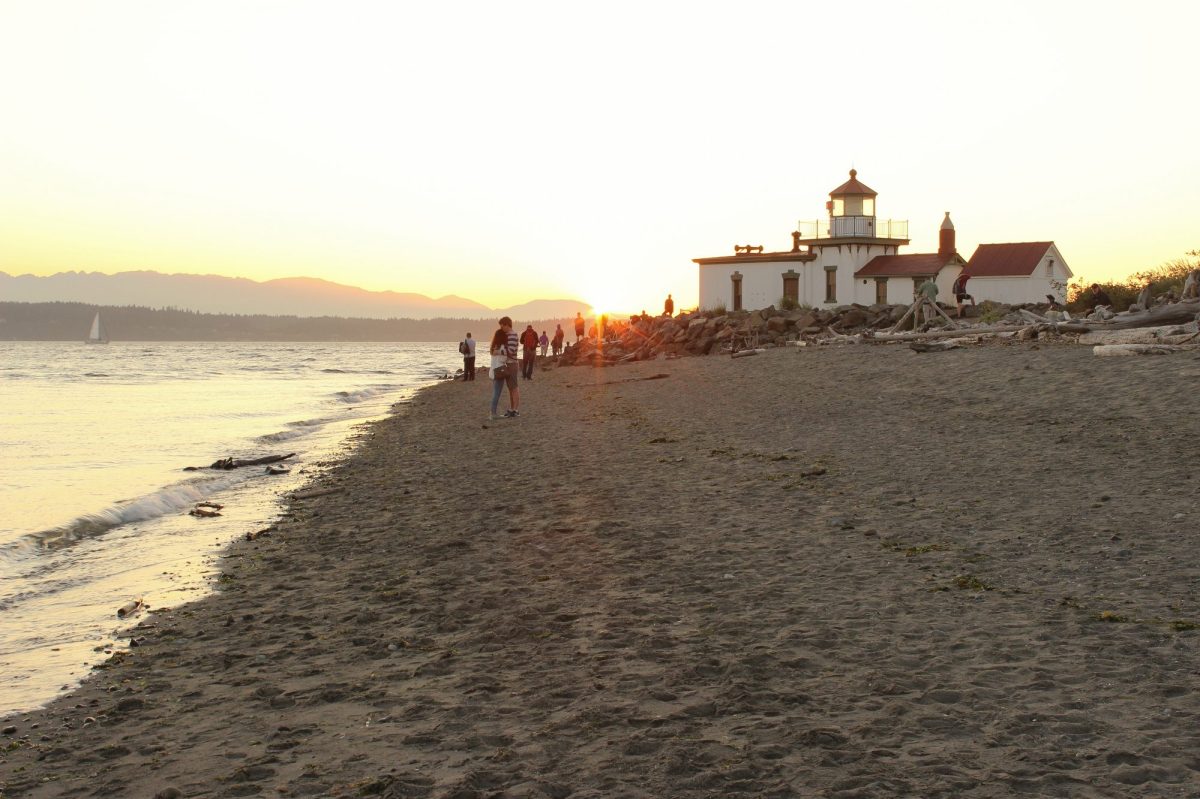 Hi again Instagram... just here to say that there’s a new post on the blog! A stop at this beauty en route to three days at Crater Lake! Link in profile • #WeekenderAtCraterLake #craterlake #craterlakenationalpark #findyourpark #nps #toketeefalls #oregon #oregonexplored #exploreoregon #oregonnw #pnw #pnwonderland #pnwdiscovered #cascadiaexplored #thatpnwlife #northwestisbest
Every year, I make myself a camping reservation at Crater Lake, and every year, something (usually wildfire) seems to get in the way of me actually going. But this weekend, I finally got to visit this wonder for the first time in about 25 (!) years. And it was just as awesome as I remember • #WeekenderAtCraterLake #craterlake #craterlakenationalpark #nps #findyourpark #oregon #oregonexplored #oregonnw #cascadiaexplored #pnw #pnwonderland #northwestisbest #pnwdiscovered #thatpnwlife #ourcamplife #beautifuldestinations
Just popping in to to say there’s a new post on the blog from this other-worldly place! • #WeekenderInBryce #bryce #brycecanyon #brycecanyonnationalpark #utah #grandstaircase #findyourpark #nps #beautifuldestinations #mytinyatlas #optoutside #visittheusa #roadtripusa
I’ve been taking a much-needed break from Instagram, and it’s been awesome. This is just to say that there’s a freshly updated post on the blog from one of the best places in the world. Link in profile. Enjoy! • #WeekenderOnKauai #kauai #northshore #hanalei #princeville #kalalauvalley #kalalaulookout #hawaii #beautifuldestinations #sheroams #mytinyatlas #optoutside
A shrouded Fitz Roy at sunrise • #WeekenderInPatagonia #fitzroy #cerrofitzroy #elchalten #elchaltén #patagonia #argentina #losglaciares #modernoutdoors #optoutside #sheroams #ourcamplife #beautifuldestinations #mytinyatlas
This was the awesome reward for a final ascent that gained 400 vertical meters in a single kilometer. Can you spot the two little guys at the water’s edge? • #WeekenderInPatagonia #fitzroy #lagunadelostres #elchalten #patagonia #argentina #losglaciares #modernoutdoors #mytinyatlas #ourcamplife #optoutside