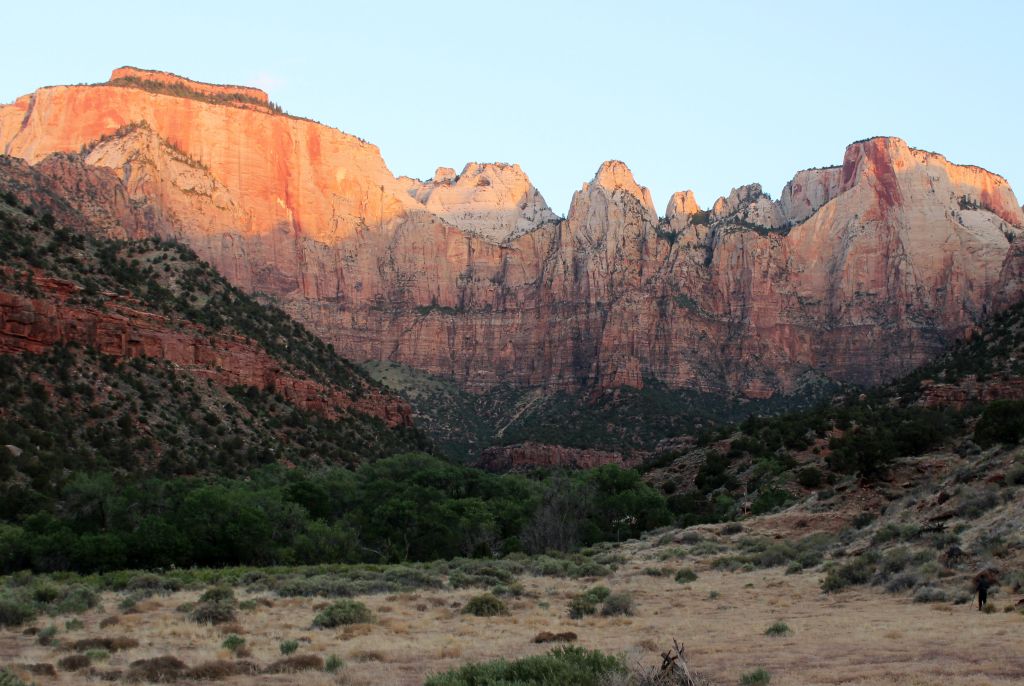 The first time I ever saw Zion National Park was by accident.

In July 2001, as my family was moving (and driving) from the San Francisco Bay Area to Washington, D.C., our trusted Chevy Suburban ran into trouble in the desert outside Las Vegas. After pushing through to an auto shop in St. George, Utah, we learned that the car might make it as far as Durango; a safer course of action would be to order a new part directly to St. George. The bad news? Our misfortune came on the eve of Pioneer Day, a statewide holiday in Utah that would delay the work on the car and extend our unintended visit.

The good news? St. George sits only 40 miles west of Zion, the 229-square-mile national park and Navajo sandstone canyon eroded by the North Fork of the Virgin River over millions of years. As for the Suburban, she had just enough juice in her for a summer afternoon among the Court of the Patriarchs, the Watchman, and the Towers of the Virgin before settling in for repair.

For the next decade and a half, I would hope to revisit this spectacular stretch of Southern Utah, preferably with a more amenable car and a few more days to spare. That chance finally came in May, when I returned to Zion for three majestic days of hiking beneath sparkling spring skies. 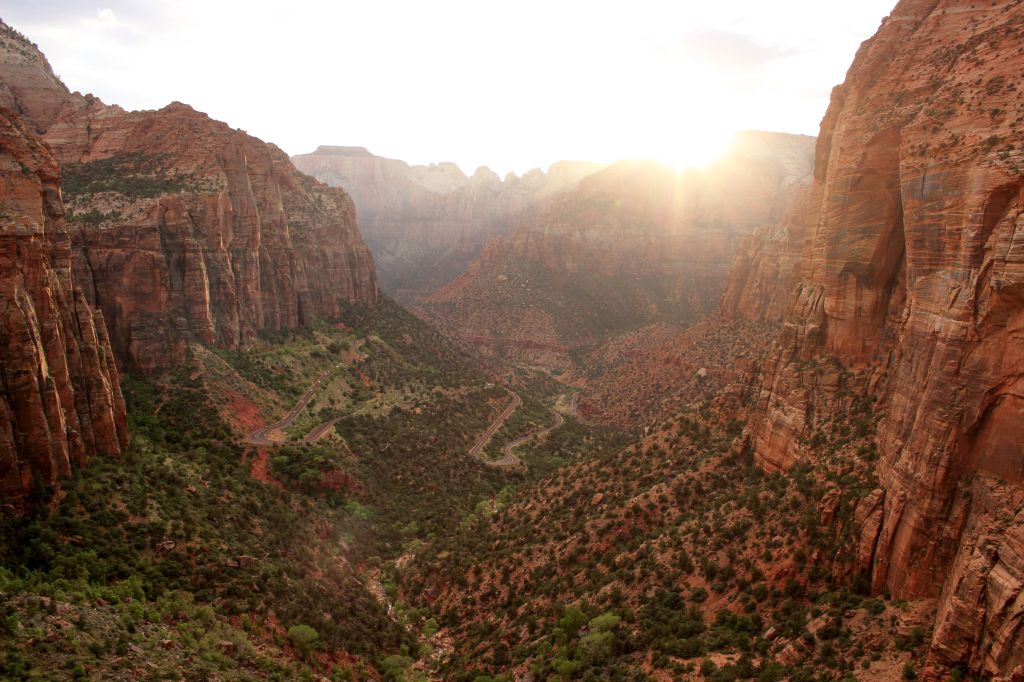 The Straight And Narrow

Your first morning in Zion begins in the narrowest part of the 15-mile-long canyon the Southern Paiute called Mukuntuweap, which is believed to mean “straight canyon” or “straight river.” You’ll be fully immersed in both as you wade up the watery path of The Narrows, an iconic section of the Virgin River that passes beneath thousand-foot walls at widths as narrow as 20 feet. If you spring for the rental footwear package from Zion Adventure Company, you’ll be relatively comfortable on a route that goes as far as Big Spring (without a permit)—and your hiking boots can stay dry and ready for other adventures to come.

Insider Tip: Flash flooding is a serious risk in The Narrows, so be sure to watch the forecast carefully. Not too eager to get wet? Follow the paved Riverside Walk from the Temple of Sinawava to catch a glimpse of The Narrows on dry land.

Quick! Everyone Out Of The Tunnel!

After a morning and afternoon spent wandering the canyon floor, let golden hour bring you to the Canyon Overlook Trail more than two thousand feet above. This easy, one-mile path leads to one of the most glorious viewpoints in the park, where the colorful splendor of Zion Canyon unfolds beneath a setting sun. The drive up to this open ledge also passes through a wonder of engineering—the 1.1-mile-long Zion-Mt. Carmel Tunnel that was cut through the canyon wall and completed in 1930.

From slot canyons to weeping walls, natural arches to red and white rock mesas, the geologic beauties of Zion are on full display in the four-mile climb to Observation Point. This strenuous ascent gains 2,148 feet of elevation on its way to a 270-degree lookout at the canyon’s northern end—one you’ll be glad to reach before the afternoon heat settles in. It’s a steady slog that will make you grateful for the shade of Hidden Canyon, a short detour on the way up or down that disappears into a blissfully cool gorge.

Standing guard at the entrance to Zion Canyon, the angular face of the Watchman has become one of the park’s most recognizable landmarks, due in part to its beautiful way of catching the setting sunlight. Photographers gather nightly on the bridge at Canyon Junction to witness this classic scene; leisure walkers can do the same on the riverfront Pa’rus Trail. As for hikers? If there’s still any steam in your legs, make the 1.7-mile climb to the base of the Watchman itself, where you can settle in among juniper and piñon pine to see the mountain’s face algow. 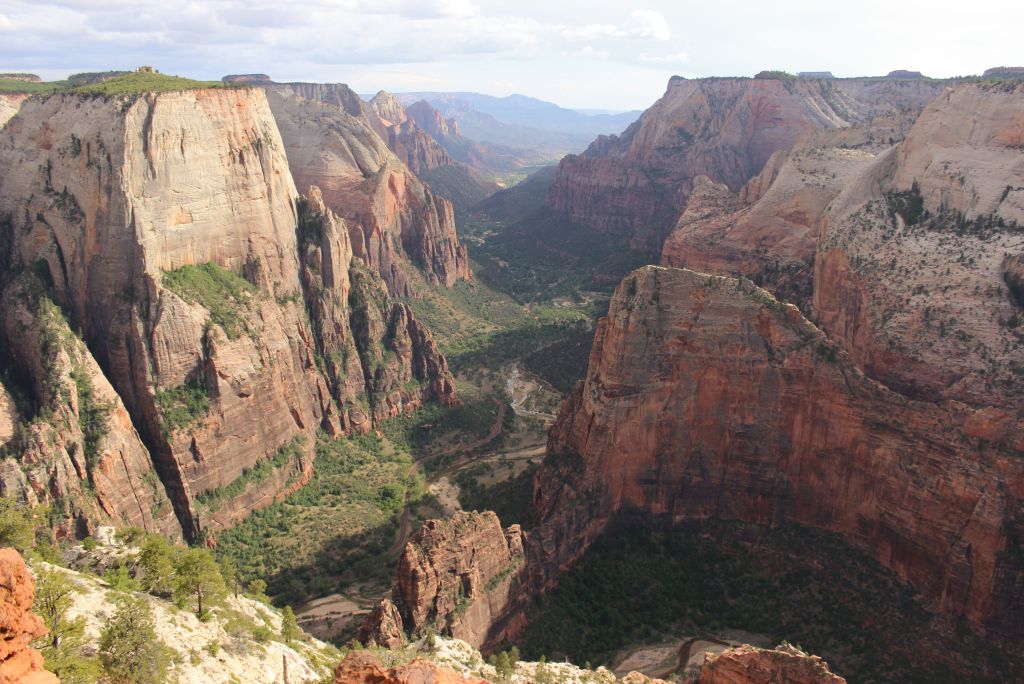 In a park that saw 4.5 million visitors in 2017, the early wake-up call is both a necessity and a blessing. This morning, you’ll make a pre-dawn start to reach the meadow behind the Zion Human History Museum, an open expanse framed by the West Temple and the Altar of Sacrifice (a cliff so ghoulishly named for the red iron oxide that streaks down its face). These Towers of the Virgin make a stunning scene at any time of day—but all the more so when collectively set ablaze by the rising sun.

It’s also the perfect time to hop a shuttle to The Grotto, the starting point for Zion’s most legendary trail. What Angels Landing lacks in length (only 5.4 miles roundtrip), it exponentially makes up for in relentless vertical gain, 360-degree views, and terrifying drop-offs that have claimed the lives of eight people since 2004. The trail’s final section is a hand-over-foot scramble on the blade edge of a fin-like formation—one you’d be wise to complete in the early morning without much foot traffic in the opposing direction. So why do it at all, you ask? It’s a life-affirming thrill that will leave you shaken and breathless in all the right ways.

Insider Tip: Angels Landing is absolutely not for children and those with balance issues or a fear of heights. Seriously. It’s not uncommon to see people in tears up there.

Nerves frayed and legs a little weary, there’s no better time to follow the Kayenta Trail for a soothing walk to the Upper, Middle, and Lower Emerald Pools. This subtle up-and-down trail is a verdant oasis in the midst of red rock desert, offering magnificent views of the canyon walls across the river. It’s also a gentle reminder of why the early Mormon pioneers called this place Zion to begin with—it’s a little piece of natural sanctuary that will leave you longing to return.

Understanding the Shuttle Service: In an effort to reduce congestion in Zion Canyon, the canyon road is closed to private vehicles—and open to free shuttle buses only—in the spring, summer, and fall. It may sound like a hassle, but if you understand the system and plan your time accordingly, it can be a delight.

First, you’ll want to keep the shuttle system in mind when securing lodging. The ideal scenario is to reserve a room at Zion Lodge, a site at the Watchman or South Campground, or a hotel room in Springdale within walking distance of the Zion Canyon Visitor Center. These options will give you easy access to the Zion Canyon Shuttle and eliminate the need for parking at the visitor center (which gets insane after 9 a.m.) or in the town of Springdale (which comes with a fee).

Second, keep in mind that the best times to experience Zion are the early morning and the late afternoon/early evening. Visitors at these times will be treated to uncrowded buses, a serenely quiet canyon, and spectacular light for photographs.

Where to Eat: In the grand tradition of America’s national parks, the dining options at Zion Lodge leave something to be desired. Thankfully, the town of Springdale is just outside the park gates, offering a few charming options for breakfast, lunch, dinner, and picnics on the go. Bring along a custom-made sandwich from Sol Foods for a day out on the trails, or take a break from the mid-day crowds with a Mexican lunch at Oscar’s Café. Some of the best mornings begin at Café Soleil or MeMe’s Café; the evenings are reserved for the mountain view patio at King’s Landing Bistro.