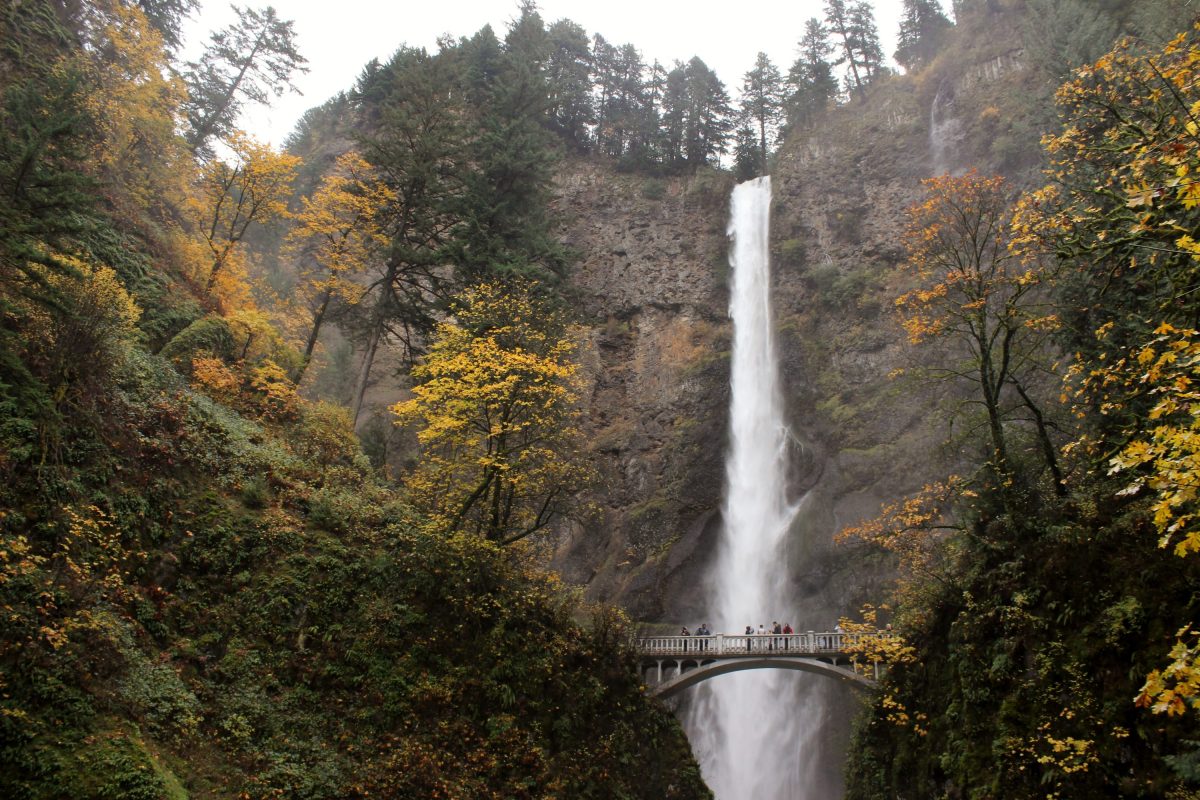 If you were lucky enough to come of age in the 1980s and 1990s, The Oregon Trail was likely your first introduction to computers, to the nearly impossible task of hunting squirrels, and to the very real dangers of fording a river. It also may have been your first exposure to the Willamette Valley, that little piece of verdant paradise your wagon traveled 2,000 miles to reach.

So what is it that led hundreds of thousands of settlers—and countless elementary school students—to brave dysentery, typhoid, and meager rations to reach a valley at the foot of the Cascades? Although I cannot speak for 19th century Americans, I have to wonder if the magnetism of Portland—the city guarding the Willamette Valley’s northern reaches—was apparent even then. Since its incorporation in 1851, Portland has become Oregon’s most populous city; a sanctuary for hikers, bikers, coffee lovers, and beer drinkers; and a place with a locally sourced restaurant or food cart for every day of the year.

So grow out your beard and unlock your bike. We’re in beautiful Portland for the next three days.

A River Runs Through It

The Willamette River flows northward through Portland, still lazy and unaware of its impending convergence with the Columbia. On the west bank, downtown Portland is flanked by the boutiques and restaurants of the West End, the repurposed warehouses of the Pearl District, and the hillside expanses of Forest and Washington Parks; the more residential east side is eclectic, ever-unique, and the epicenter of Portland’s culinary scene.

Although there are benefits and drawbacks to both east and west Portland, consider booking an Airbnb near S.E. Division, one of the city’s most foodie-friendly streets. Why? It’s all about morning proximity to Little t American Baker, where the tender baguettes and double chocolate croissants are perhaps the best baked goods in the whole city (2600 S.E. Division Street).

In 1903, the Olmsted brothers—sons of Frederick Law Olmsted, the father of American landscape architecture—were hired to study Portland’s city parks. Their recommendation? To preserve the wooded hills in northwest Portland as “a forest park,” thus helping to create the largest urban forest in the United States.

But with more than 80 miles of trails, the 5,157-acre Forest Park can be an overwhelming destination for hikers. Looking for views? Follow the Ridge Trail until you spot the distinctive green towers of St. Johns Bridge. Prefer a canopy of trees? The Wildwood Trail traverses 30.2 miles of Douglas-fir, western hemlock, and red cedar forests—serene and beautiful come rain, fog, or sun (park near Macleay Park at N.W. Upshur Street and N.W. 29th Avenue).

Rebuild your strength over lunch at Olympia Provisions, salumist Elias Cairo’s showcase of traditionally crafted charcuterie. If your arteries are up for a challenge, don’t miss the Spanish board—a flavor-packed assortment of chorizo, jamón de York, and piquillo pepper salad (107 S.E. Washington Street).

In a city with more breweries than any other in the world, why not let pre-dinner drinks take the form of a beer-tasting adventure? Ex Novo has the distinction of being the country’s first nonprofit brewery (2326 N. Flint Avenue), Great Notion has an ambience that’s tough to beat (2204 N.E. Alberta Street), and Upright Brewing is a local favorite for its intimate, subterranean tasting room (240 N. Broadway, in the basement of the Leftbank Building).

When Nong Poonsukwattana moved from Thailand to the United States in 2003, she brought with her two suitcases, $70, and a nascent idea for what would become Portland’s most celebrated food cart. Nong’s Khao Man Gai is simple enough—but her execution of tender poached chicken, jasmine rice, and a legendary fermented soy bean sauce is as perfect as it comes. Pay a visit to the east side brick-and-mortar location day or night—you’ll be thinking about that sauce (and likely toting a bottle) on the plane ride home (609 S.E. Ankeny Street). 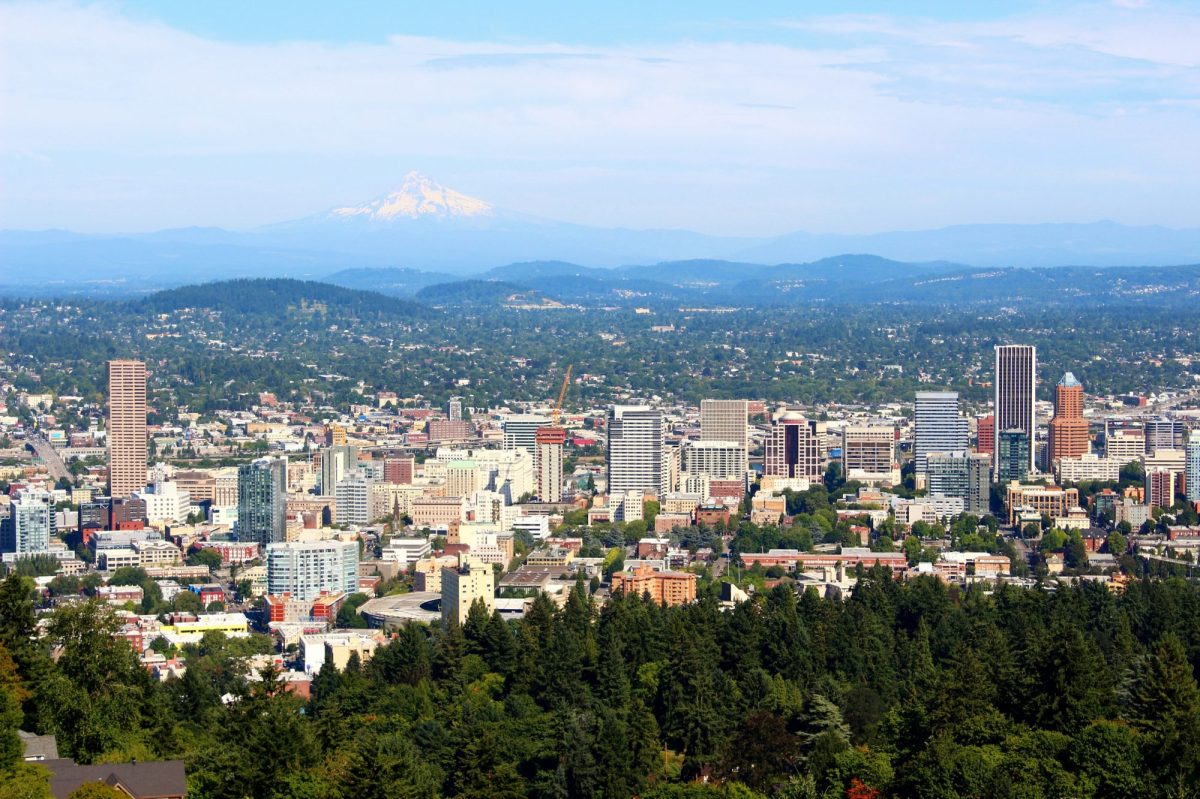 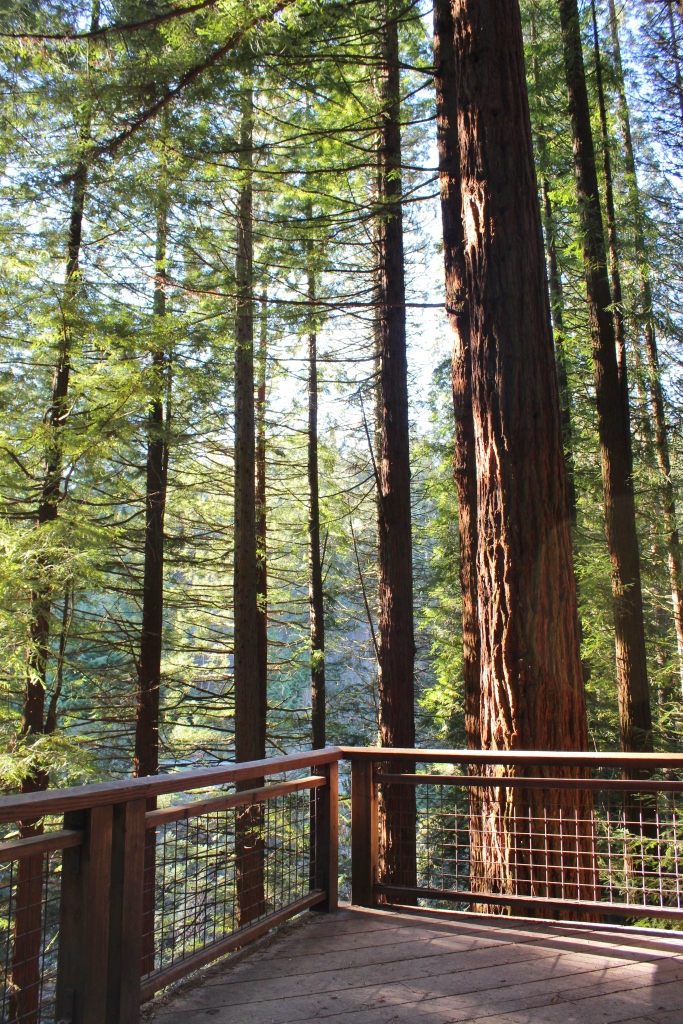 Pop The Top, Toss The Stump

From Coava to Extracto, Portland has cultivated an intimidating number of artisanal coffee roasters. I won’t presume to tell you which is most worthy of your devotion, but I will say that S.E. Division Street is home to one of the finest. Since its founding in 1999, Stumptown Coffee Roasters has blazed trails all the way to Seattle, Los Angeles, and New York, but there’s nothing quite like having a cup at the original (4525 S.E. Division Street).

Coffee may not fill you up, but anything you order at Pine State Biscuits will. This beloved shop, which began as a stall at the Portland Farmers Market (a must-experience Saturday destination on its own), now has three storefronts that regularly turn out Portlanders’ favorite southern breakfast. Think fried chicken, shrimp and grits, and biscuits and gravy—just the kind of fuel you need for a morning in the Gorge (1100 S.E. Division Street, 2204 N.E. Alberta Street, or 125 N.E. Schuyler Street).

As the Columbia River has flowed westward and formed much of the boundary between Oregon and Washington, it has carved an 80-mile canyon through the Cascade Range. This natural wonderland, the Columbia River Gorge, once helped Meriwether Lewis and William Clark find the Pacific Ocean; today, it is best known for the 77 waterfalls that plunge from Oregon’s cliffs.

The splendor begins 20 miles east of Portland, where Chanticleer Point marks the first dramatic vista of the Historic Columbia River Highway. From there, every turn in Route 30 offers something for hikers of all motivation levels. Looking for a challenge? Try the steep ascent to Munra Point, where an exposed ridge overlooks Mt. Adams and the Bonneville Dam. Looking for something easy? The short trails to Elowah and Wahclella Falls provide stunning canyon views. Looking to get wet? Try the half-walk, half-swim over the log jam in the Oneonta Gorge. Looking to avoid a hike altogether? Stick with the drive-up views of Latourell and Multnomah Falls.

And for the bargain price of $2, cross the aptly named Bridge of the Gods when you reach the town of Cascade Locks, where scenic Route 14 awaits in Washington to lead you back home.

Note: As of 2018, many trails on the Oregon side of the Gorge remain closed due to the Eagle Creek Fire. My favorite alternative? Washington’s 7.5-mile Hamilton Mountain Loop.

What Exactly Were The Previous Straws?

Depending on what time you return to town, you’ll either be in need of a mid-day meal or an afternoon pick-me-up. For the former, head to ¿Por Qué No?, a cozy, colorful taco shack full of local ingredients and big Mexican flavors (4635 S.E. Hawthorne Boulevard or 3524 N. Mississippi Avenue). For the latter, the farm-to-cone ice cream at Salt & Straw is the perfect, delicious dose of small-batch afternoon sugar (838 N.W. 23rd Avenue, 3345 S.E. Division Street, or 2035 N.E. Alberta Street).

The House Of The Setting Sun

The Portland Japanese Garden is one of the city’s most tranquil spaces, a 12-acre respite enveloped by Washington Park. This series of five distinct gardens showcases the essential Japanese elements of stone, water, and plants, and is only steps away from another stunning work of nature—the colorful blooms of the International Rose Test Garden. But take the setting sun as your cue to head a few blocks north to Pittock Mansion, the grounds of which are especially beautiful at golden hour (3229 N.W. Pittock Drive).

Insider Tip: Time your visit to the Portland Japanese Garden for the first full weekend of the month, when Bank of America customers receive free admission.

Narrowing down your dinner selections at Ava Gene’s is no simple proposition. The Roman-inspired, locally spun menu presents so many temptations, from tender salumi to decadent handmade pastas that vary by the day. But the beauty of Ava Gene’s lies in the unexpected, including the star treatment bestowed upon vegetables and salads (3377 S.E. Division Street). Add in a wonderful staff, enchanting décor, and a post-dinner slice of pie at Lauretta Jean’s across the street, and you’re in for a lovely evening (3402 S.E. Division Street). 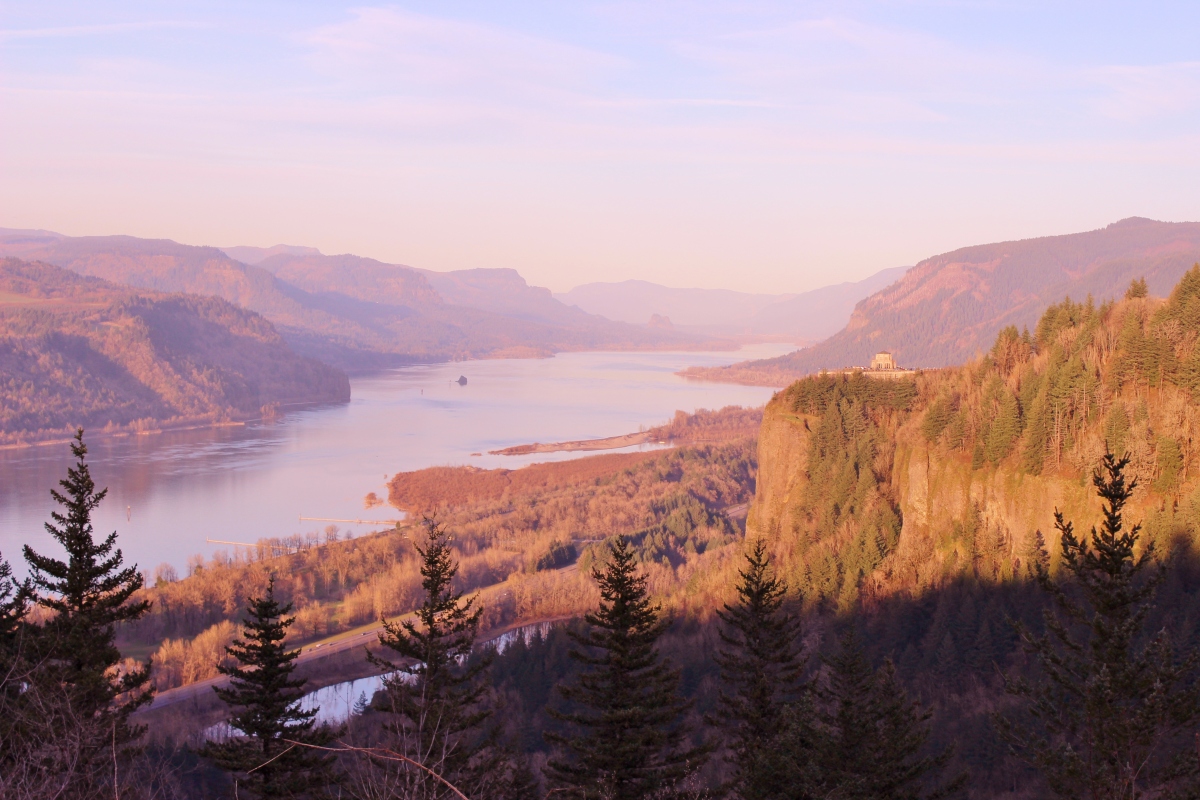 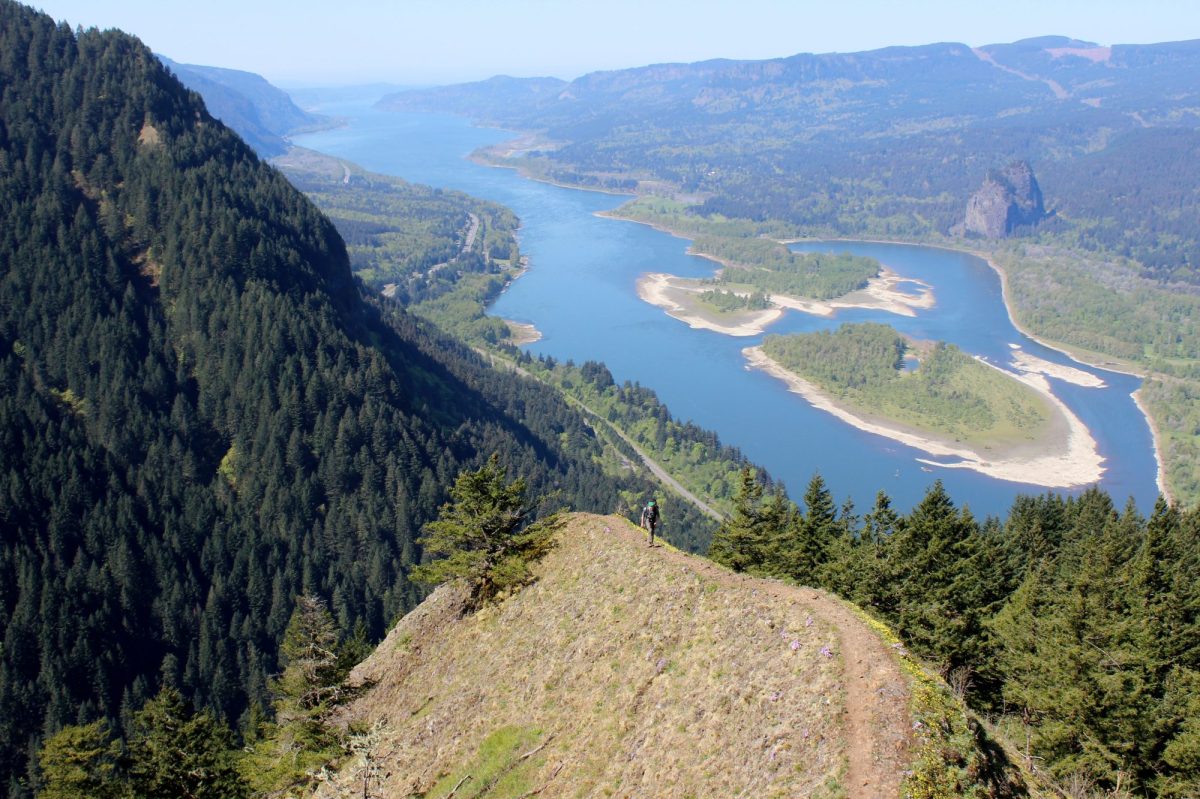 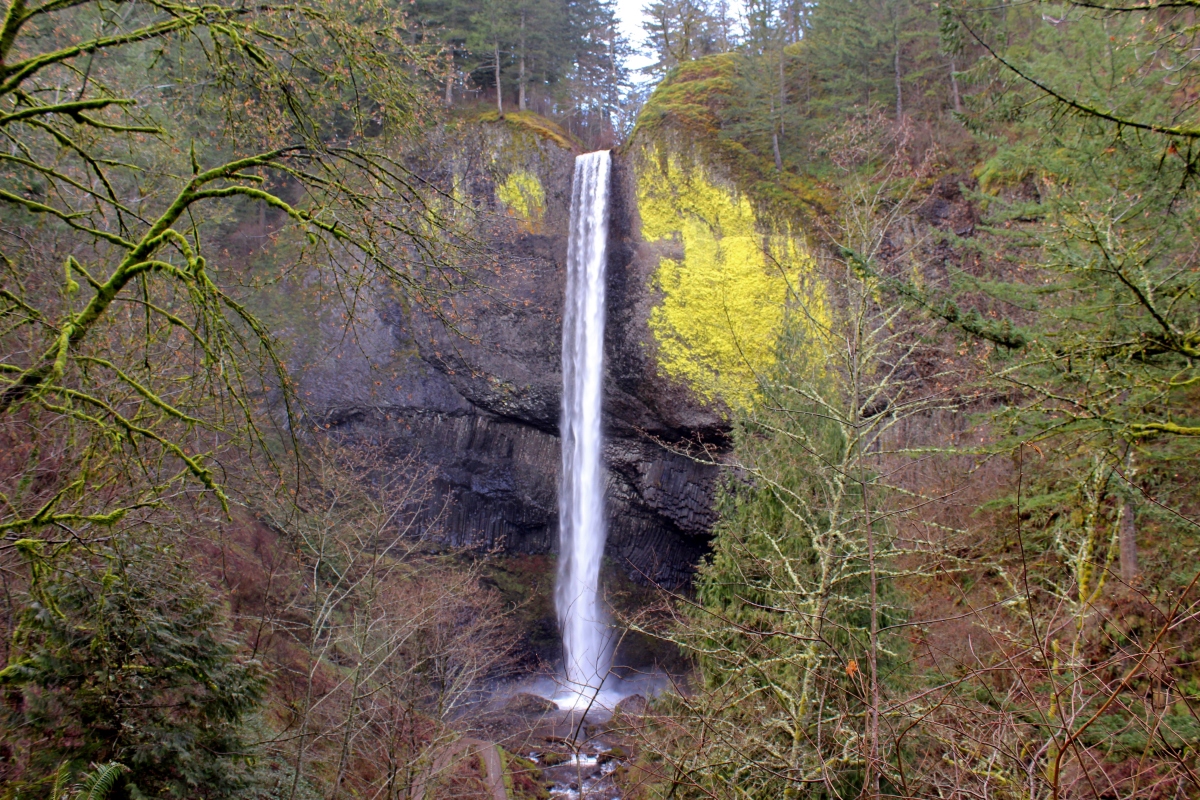 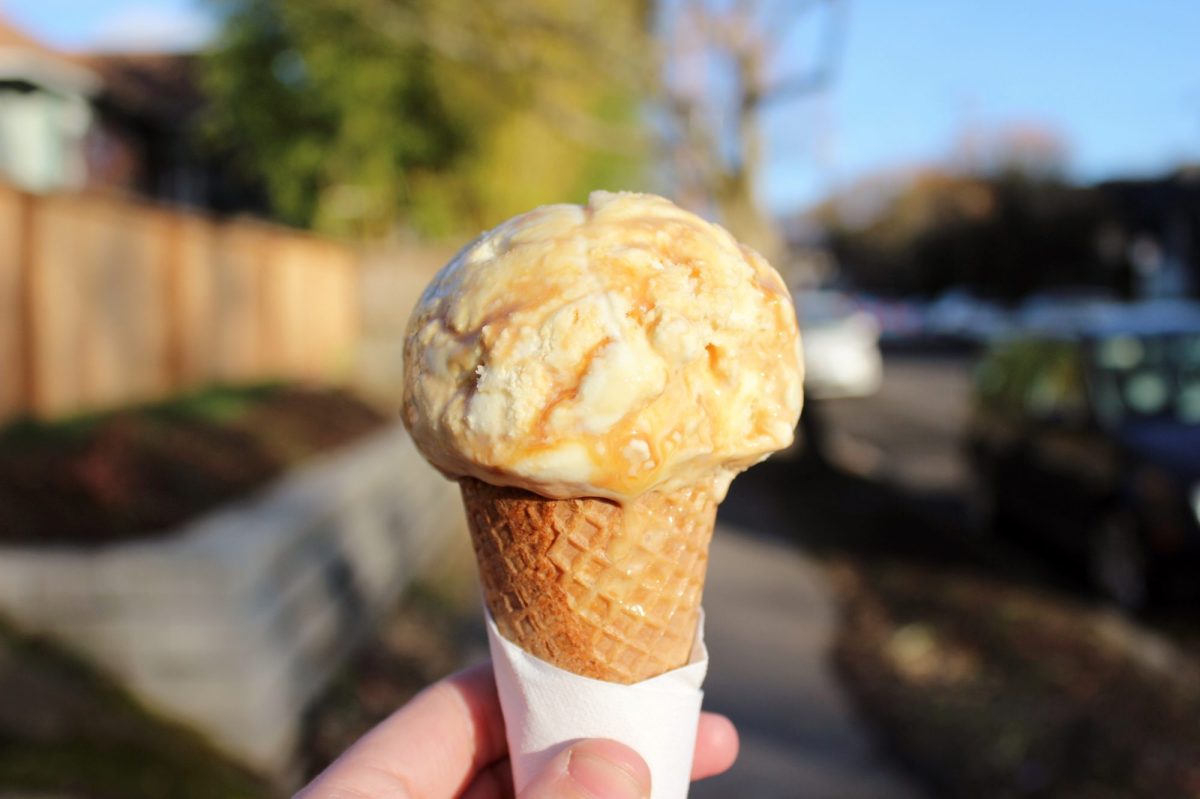 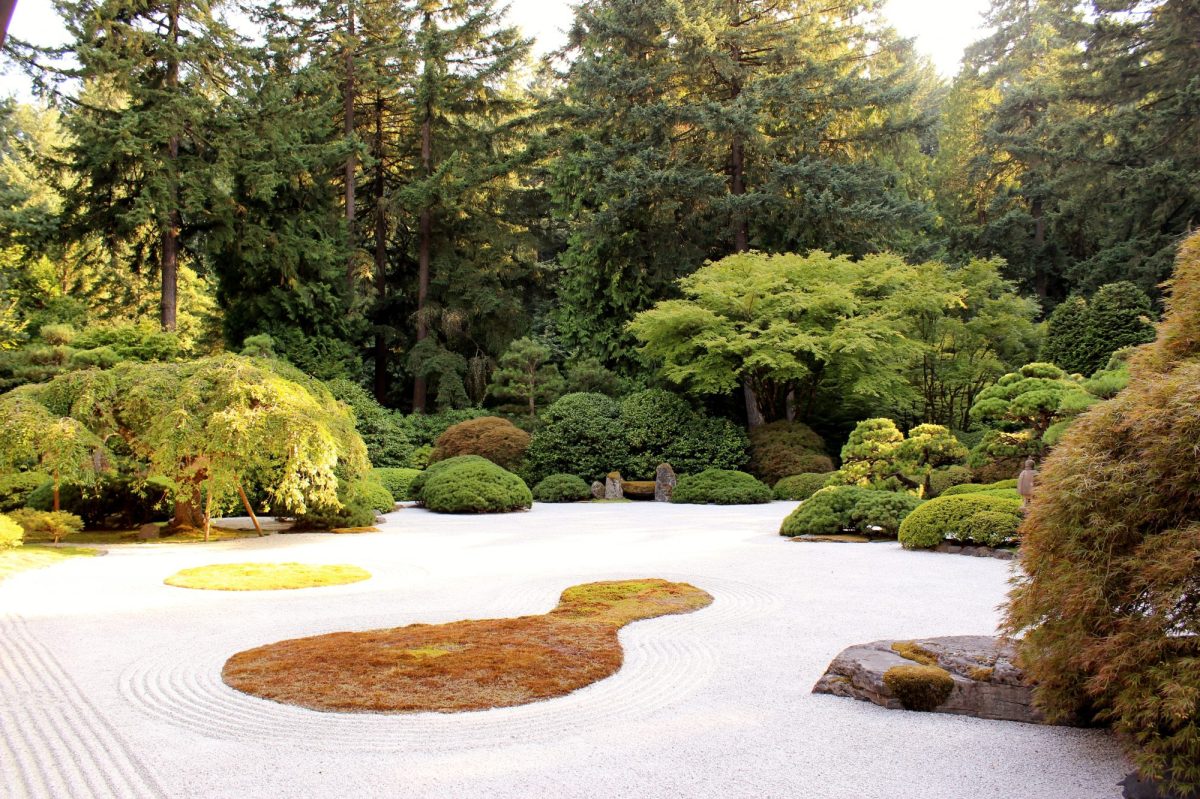 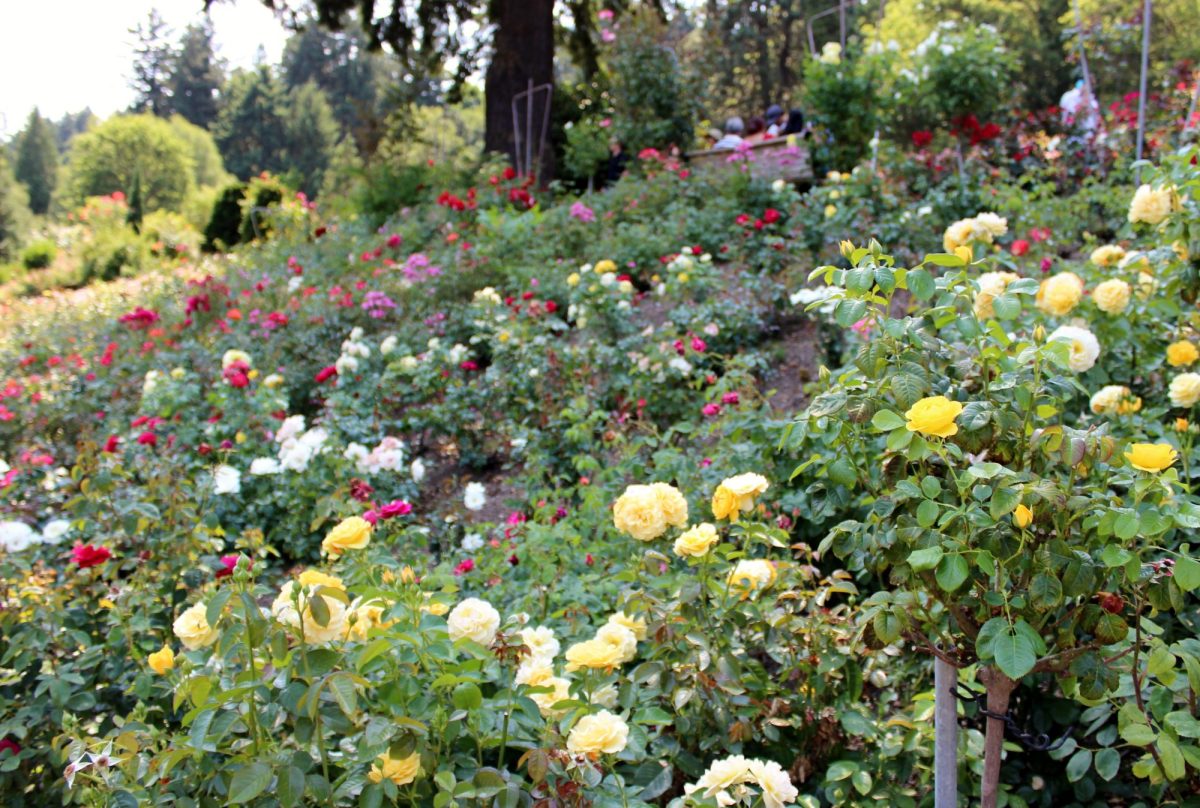 For early risers, Sunday mornings at Sweedeedee are an absolute delight. The records are spinning, the corncakes and eggs are perfectly cooked, and the sweets are heaven-sent. But don’t waltz in late, not expecting to find a crowded dining room and a prohibitive wait. The good news? Cookies, cakes, and salted honey pie are waiting to tide you over (5202 N. Albina Avenue).

Getting a later start? It’s hard to find a more pleasant experience than a morning at Pip’s Original, home of the absolute best, made-to-order donuts in all of Portland (4759 N.E. Fremont Street).

It’s been a while since I became a resident of Portland, yet I still gasp each time I round a bend and catch a glimpse of Mt. Hood. The highest peak in Oregon is only 50 miles southeast of Portland, where its 11,249-foot summit is flanked by ski lifts, evergreen forests, and serene mountain lakes.

Mt. Hood National Forest is also the site of countless trails for hikers to enjoy in the summer, snowshoers to traverse in the winter, and photographers to stake out all year long. For a 360-degree view of Mt. Hood, Mt. Adams, and Mt. Jefferson, park your car at the Mirror Lake Trailhead and make the 5.6-mile roundtrip ascent of Tom, Dick, and Harry Mountain. For something a bit more level, the 1.9-mile Trillium Lake Loop Trail is perfect for families, novices, and those who don’t believe in sweating for a postcard view.

Communism Is Just A Red Herring

In a city known for its culinary creativity, I suppose it shouldn’t be surprising that Portlanders are clamoring to eat at Kachka. The décor is just the right amount of Soviet kitsch, while the cuisine is a wonderfully modern tribute to classic Russian drinking food (960 S.E. 11th Avenue).

But if you’re longing for something a bit more classic and comforting, there’s nothing quite like a Sunday night at Apizza Scholls. The wooden booths, the pitchers of Diet Rite, and the no-frills atmosphere will take you right back to childhood, but the New Haven-style pizza is some of the best you’ll find on the entire west coast (4741 S.E. Hawthorne Boulevard). 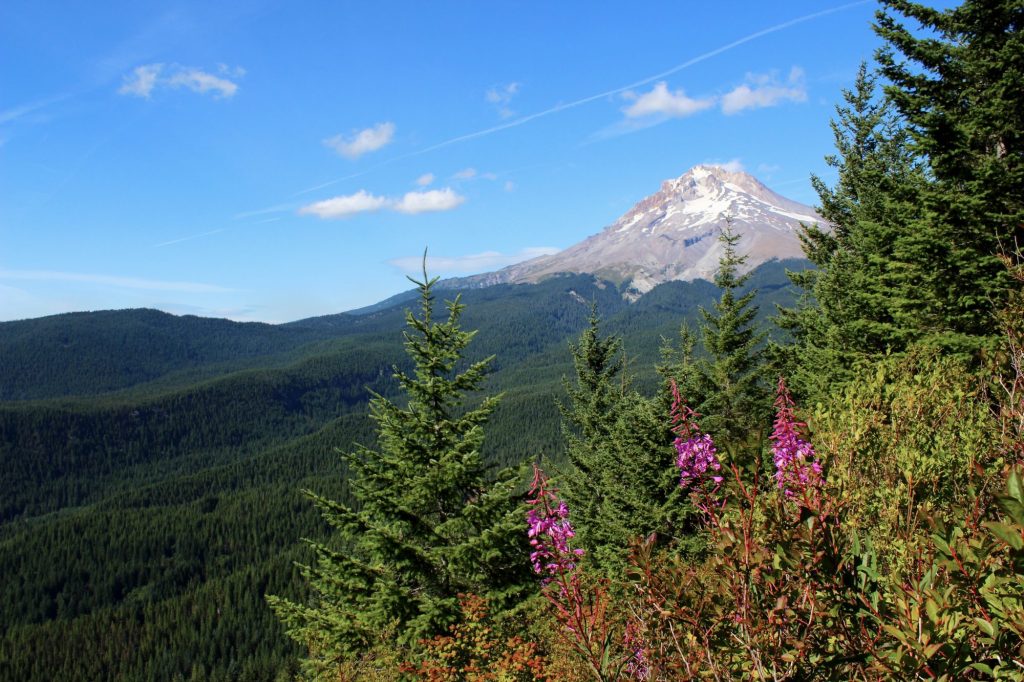 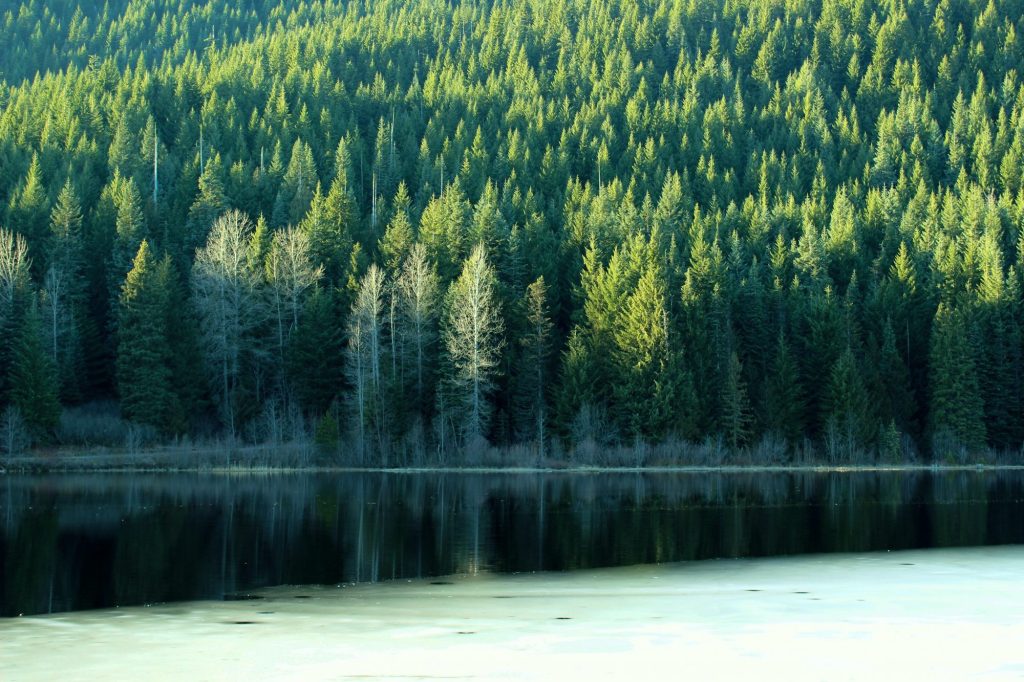 Although parking is often easy in Portland—and you’ll likely need a car to reach the Columbia River Gorge and Mt. Hood—remember this is first and foremost a bicycling city. Whether you’re renting for the day or for the week, Everybody’s Bike Rentals offers affordable vintage bikes and wonderfully friendly service.

Keep in mind that Portland is only 80 miles from the beautiful northern coast of Oregon. And while Ecola State Park, Cannon Beach, and Oswald West State Park are among my favorite day trips from the city, they are also worthy of a long weekend all their own. So stay tuned for The Long Weekender’s next post on the best of the northern Oregon coast.