From the rocky spires of the Grand Tetons to the craggy shores of Acadia, the United States’ 59 national parks are as diverse as the nation itself. Where Death Valley holds a world record for the highest air temperature ever recorded (134 degrees), the slopes of Mt. Rainier saw an astounding 93.5 feet of snow in the winter of 1971.

So what makes Olympic National Park stand out among these millions of acres of natural wonder? Perhaps no single park offers such a variety of ecosystems within its boundaries. These 1,441 square miles of Washington’s Olympic Peninsula are guarded by glaciated mountains, subalpine meadows, temperate rain forests, and a desolate Pacific coastline. The Hoh River Valley on the park’s west side sees 135 inches of annual precipitation; the peninsula’s east side receives as little as 15.8 inches.

So pack your boots and anything else you might need for rain, sun, wind, or snow. We’re heading into the Olympic Wilderness for the next three days.

Regular visitors to Yellowstone, Yosemite, and the Great Smoky Mountains may be accustomed to peak season traffic jams, but here in Olympic, an astounding 95 percent of the park is federally designated wilderness. So what does that mean exactly? There is no road that bisects these 922,000 acres; instead, the interior is reachable via Highway 101 (which circumnavigates the park) and roughly 611 miles of hiking trails.

As a result, Olympic is a place for solitude, undisturbed wildlife viewing, reconnecting with nature, and (quite often) driving long distances. So if you adhere to this itinerary, consider the following lodging suggestions as well. On your first night, a beachfront campsite at Kalaloch will give you easy access to the Hoh River and the Pacific coast; on your second night, the historic Lake Crescent Lodge (or Fairholme for campers) will better situate you near Lake Crescent and Hurricane Ridge.

Let’s Get A Score For Ruby

Get an early morning start to admire the towering sea stacks at Ruby Beach, one of the southernmost shorelines of the Olympic Wilderness. This stunning stretch of sand is most beautiful when the tide and the light are low, and when the heaping piles of driftwood—remnants of fallen trees discharged by the Hoh River—are your only company.

With 12 to 14 feet of annual precipitation, the Hoh Rain Forest—perhaps the wettest place in the continental United States—is an enchanted collection of immense conifers, blankets of ferns, and lush mosses. Sitka spruce and western hemlock (some as tall as 250 feet) line the Hoh River Trail, which provides everything from a gentle two-mile walk to a 17.4-mile ascent to Glacier Meadows. But no matter when you choose to turn back, you’ll enjoy a glorious view of the Hoh River making its 7,000-foot descent from Mt. Olympus to the Pacific Ocean.

After stopping in Forks to grab picnic fixins for dinner, make the 0.7-mile descent to Second Beach to enjoy a sunset view of one of the park’s most iconic coastal landscapes. Scour the surrounding sea stacks for seals, sea lions, otters, and bald eagles, and keep an eye open (in March, April, and October) for migrating whales on the horizon.

With its strong currents, isolated shoreline, and severe wind and weather patterns, the coast around Rialto Beach was, for years, an infamous site for shipwrecks. But much of what makes this area so treacherous is also what makes it beautiful—and easily appreciated by those who visit at low tide. So make your visit early in the morning or close to sunset, and be sure to catch a glimpse of the aptly named Hole in the Wall one mile up the beach.

Some 30 to 45 million years ago, the subduction of an ocean plate beneath the North American plate caused the Earth’s crust to crumple in the Pacific Northwest. As the seabed was thrust upward, glaciers helped carve the Olympic Mountains, the highest point of which is the 7,965-foot Mt. Olympus.

Enjoy spectacular views of Mt. Olympus, its many glaciers, and perhaps a black bear or two from the High Divide Loop, a strenuous 18.2-mile trail that some long weekenders are nuts enough to do in one day. But whether you choose to hike the whole trail, part of it, or backcountry camp for a night (May through September only, permits required), you’ll be treated to sweeping views of Sol Duc Falls, the Seven Lakes Basin, and Mt. Olympus towering over it all.

Not too keen to leave the coast? Traverse eight roundtrip miles of secluded forest and sand to Shi Shi Beach and Point of the Arches, one of the most breathtaking coastal stretches in the entire Pacific Northwest (follow Hobuck Road to reach the trailhead). 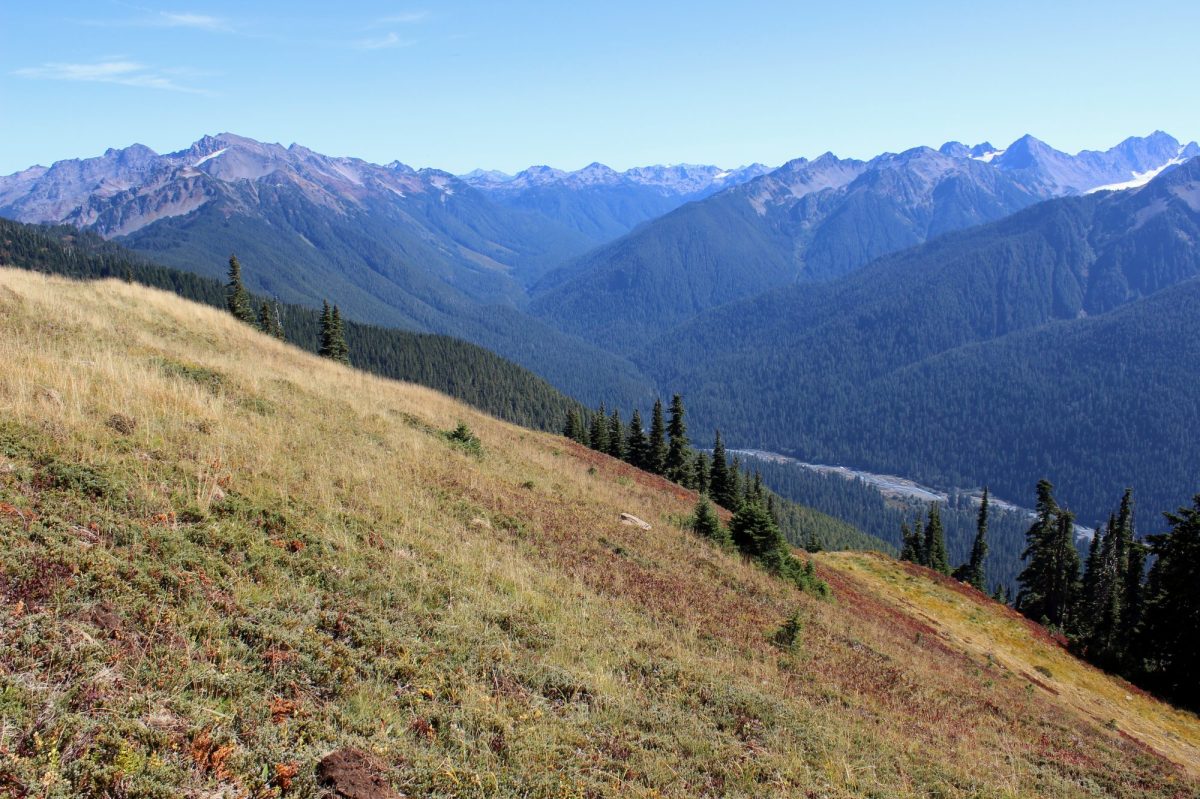 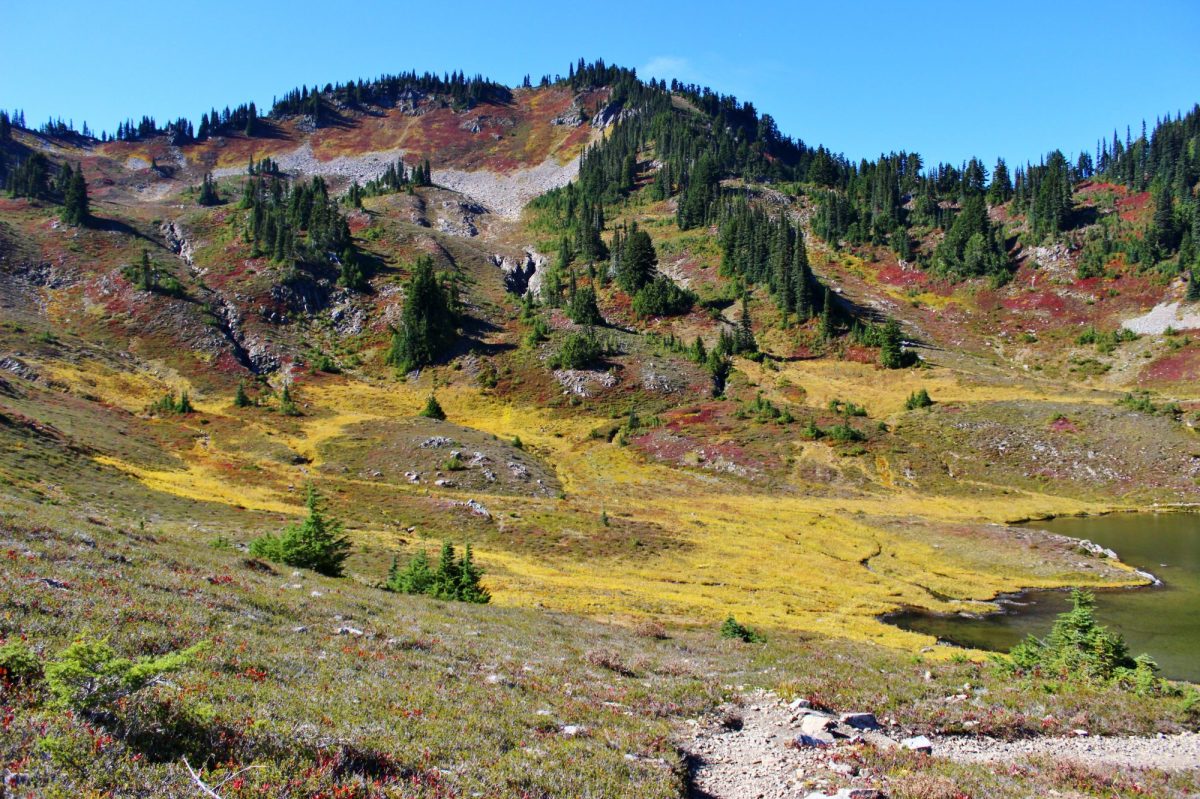 The Canyon Of The Crescent Lake

According to Native American legend, the Klallam and Quileute tribes once had a great battle along a small river. Angered by the senseless fighting, the mountain spirit threw an immense boulder at the warriors, killing them all—and damming the river to form Lake Crescent.

Glaciers would also play a part in carving the enormous depths of this mountain lake, whose remarkable clarity is the result of a lack of nitrogen—and in turn, phytoplankton. And from the Lake Crescent Lodge, you’ll have the option of renting a rowboat, launching your own kayak, or making the easy 0.9-mile ascent to nearby Marymere Falls.

Named for its wind gusts that can reach 75 miles per hour, the Hurricane Ridge Visitor Center is a gateway to the mountains for all seasons. In spring and summer, the subalpine meadows are scattered with wildflowers, and the views from the one-mile Cirque Rim Trail extend all the way to the Strait of Juan de Fuca. In winter, the gift shop rents skis, the rangers lead snowshoe walks, and the Hurricane Ridge Winter Sports Club operates two rope tows and a lift. But be advised: in winter, the road to Hurricane Ridge is open only on weekends (weather permitting), and all vehicles must carry tire chains.

Although you’ll find limited dining options in Forks, Port Angeles, the Lake Crescent Lodge, the Sol Duc Hot Springs Resort, and Hurricane Ridge, remember that this is the wilderness. Picnicking and grilling over the campfire are often your best bet.