It is perhaps the most well-known of Morocco’s imperial cities—a centuries-old medina founded by the Almoravid Dynasty in 1062. It’s home to distinctive red sandstone walls that date back to the 12th century and what has been called the busiest square in all of Africa. It has also been the playground of The Beatles, The Rolling Stones, and Yves Saint Laurent, to name just a few of the artists and musicians who have been drawn to its exotic allure.

But the city of Marrakech is so much more than the sum of its parts. It is a sensory experience of color and sound—a historic hub of culture, religion, and trade that can confound you in one moment and intoxicate you the next. As you dodge mopeds in narrow alleys and become hopelessly lost in an intricate maze of souks, you’ll also take refuge in hidden gardens, savor uniquely Moroccan flavors, and discover the breathtaking courtyards and terraces of the medina’s countless riads.

So brush up on your bargaining skills and get ready to haggle—we’re riding the Marrakech Express for the next three days.

In The Light Of The Sebban

One of the essential experiences of any trip to Morocco is sleeping in a riad—a traditional home-turned-hotel named for the garden courtyard that typically sits at its center. These cloistered mansions are often found in nameless alleys, concealing private oases of colorful tiles, ornamental fountains, and draping vines of bougainvillea.

But most importantly, the right riad offers a tranquil—and necessary—escape from the noise, heat, and general chaos of the Marrakech medina. One such sanctuary is the Riad Palais Sebban, a beautifully restored 19th century mansion with 25 rooms, several stunning courtyards and rooftop terraces, and an unbeatable location just inside the medina gate.

A UNESCO World Heritage Site since 1985, the Marrakech medina is best explored in the souks, a labyrinth of a marketplace in which you can easily lose hours, an afternoon, or several whole days. This collection of craftsman stalls is loosely divided by wares—you’ll find a souk for spices, for leather goods, for Berber carpets, for intricate metal work, and for traditional babouche slippers, to name only a few.

Feeling a bit overwhelmed? Ask your riad for the name of a trusted guide to show you the lay of the land; otherwise, just get lost and confidently bargain for anything that strikes your fancy. For a quiet afternoon break, retreat to Le Jardin, a verdant open air garden and restaurant where you can bask in the shade of banana trees, sample slow-cooked lamb and chicken tagines, and watch black-and-white art house films once the sun begins to set.

This Is The End

In centuries past, Jemaa el Fna was a square frequented by tradesmen, farmers, storytellers, and healers, but this “meeting place” of “the end” had a darker purpose as well. Once the site of public executions, the plaza has since become the domain of snake charmers, fresh orange juice vendors, and even open-air dentists. To truly experience the magic of the place, join the crowds that fill the square at sunset—you can mingle with monkeys, enjoy a plate of kefta at one of the many grill stalls, and listen to the muezzin call the faithful to prayer from the minaret of the Koutoubia Mosque.

Insider Tip: Looking for that iconic bird’s eye view of Jemaa el Fna? Head over to the Grand Balcon du Café Glacier on the south side of the square—the view is well worth the cost of an overpriced Coke. 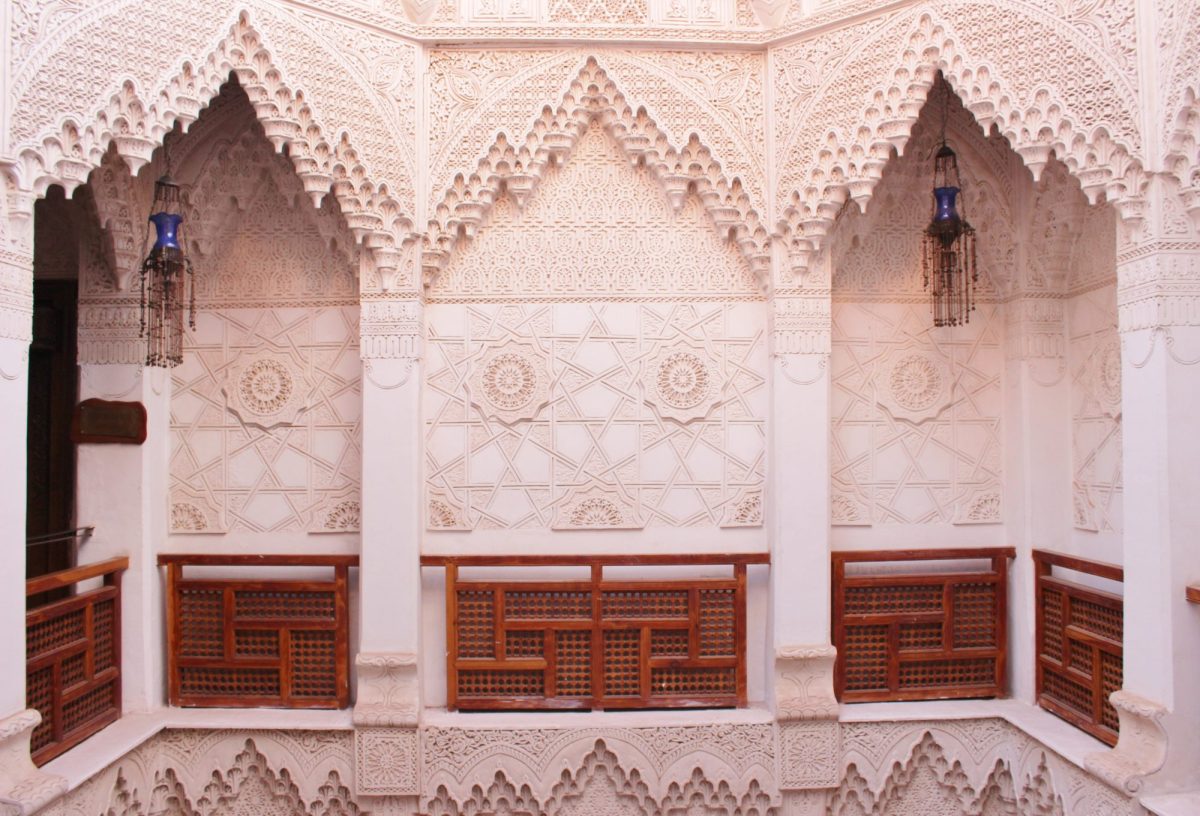 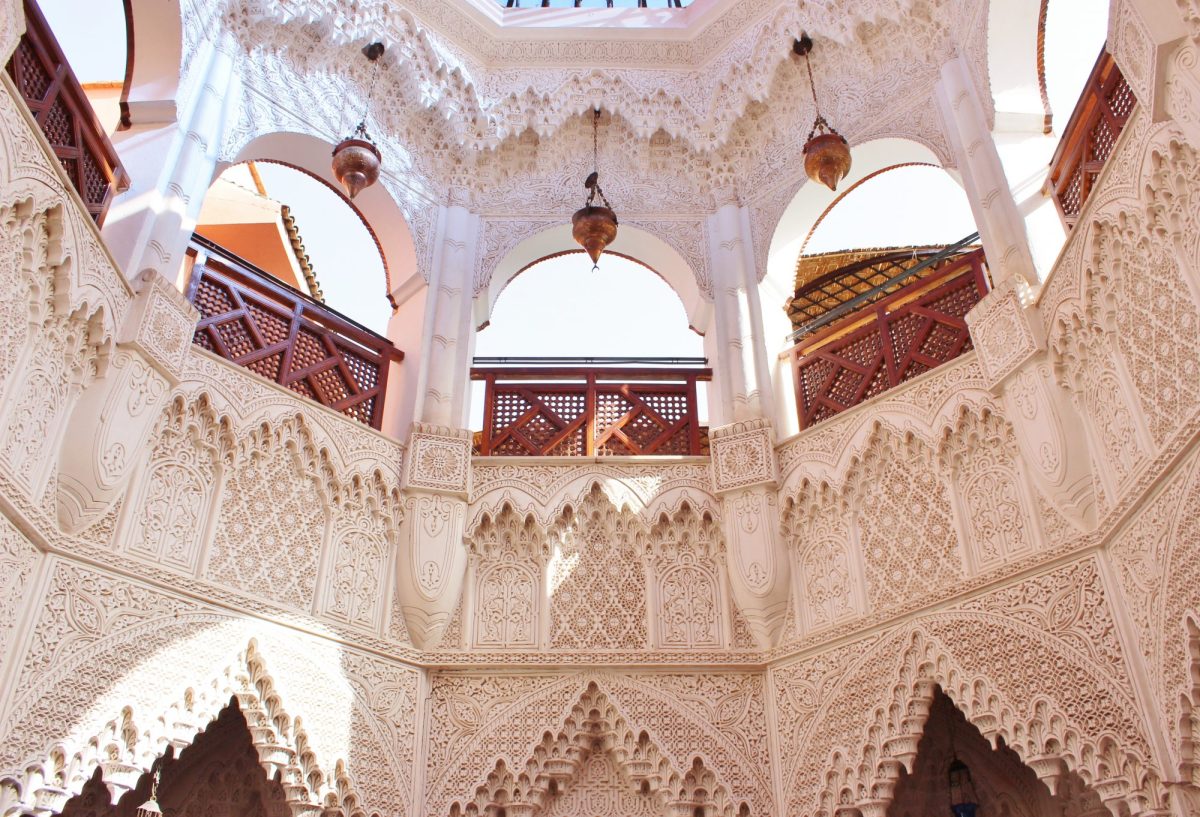 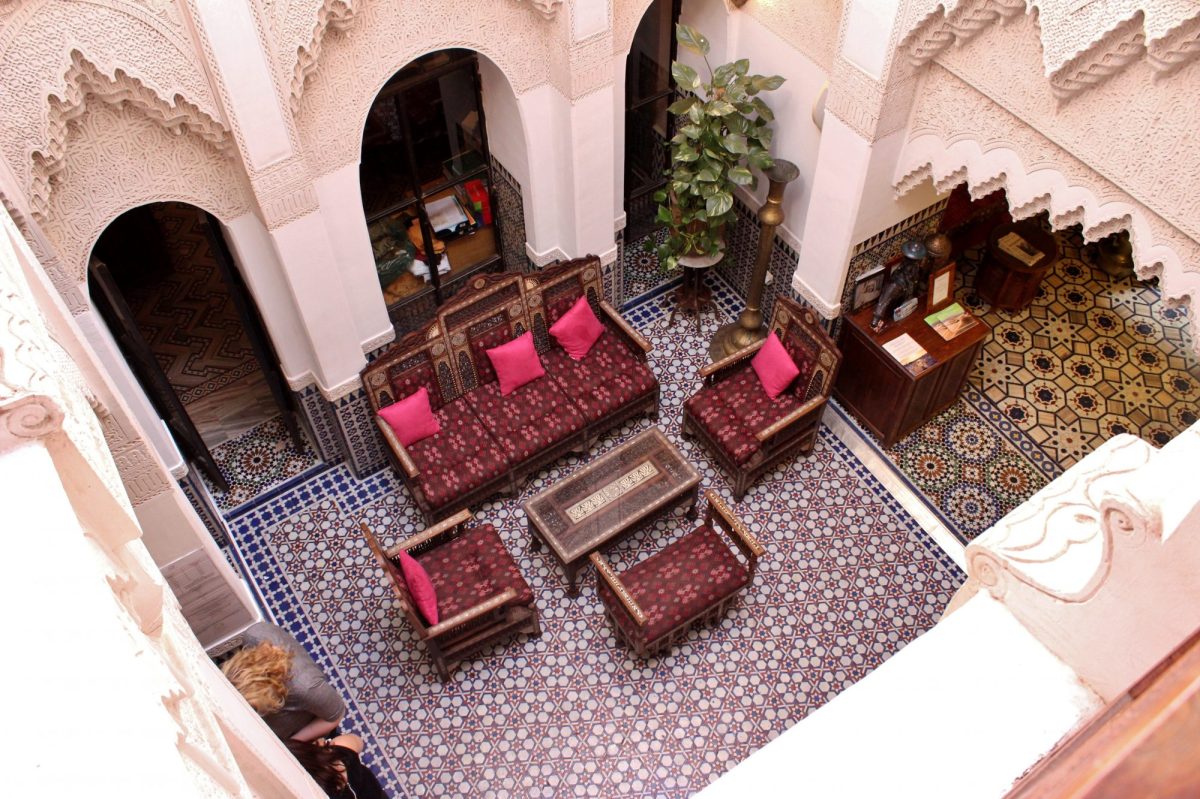 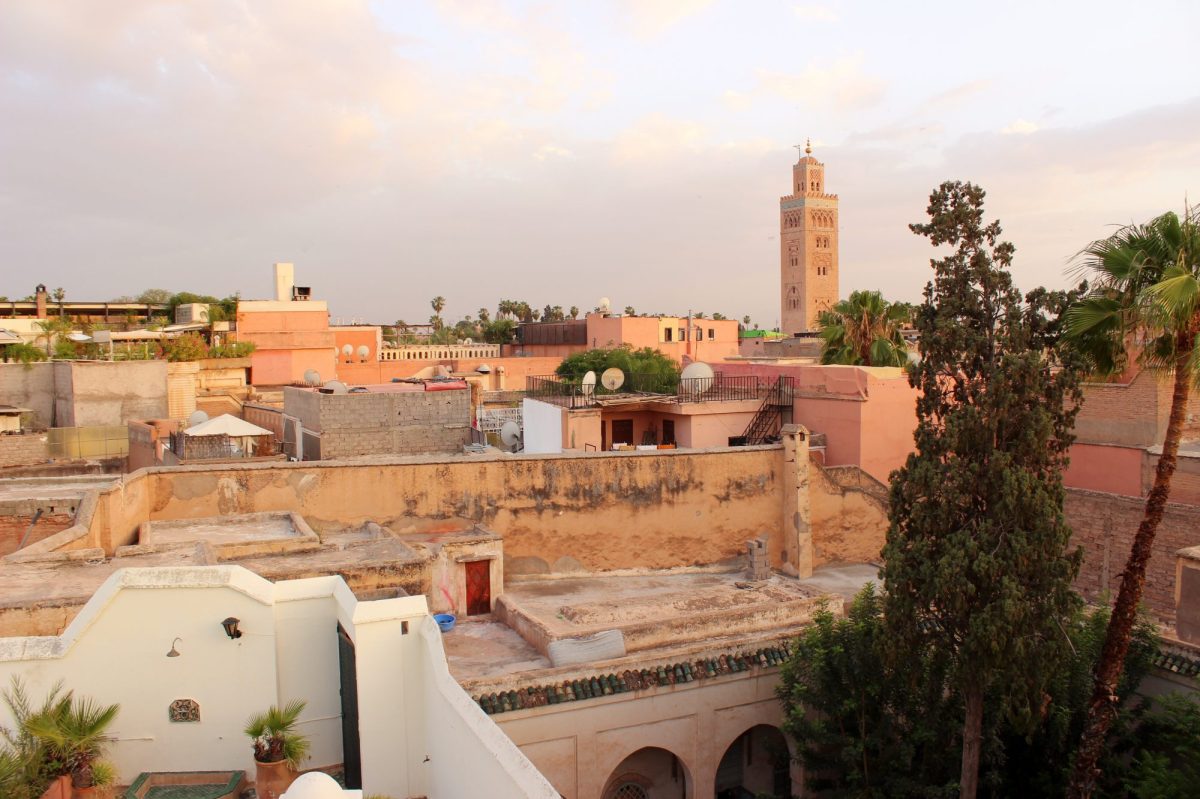 Prince Ali, Mighty Is He

Erected in the 14th century and reconstructed 200 years later, the Ali Ben Youssef Medersa has an inscription over its entryway that reads, “You who enter my door, may your highest hopes be exceeded.” Until 1960, those words were directed at scholars of theology; today, it is the carved cedar cupolas and colorful mosaics that dazzle visitors to what was once the largest medersa in all of North Africa.

This beautiful Koranic school is also right next door to the Musée de Marrakech, where you can peruse artifacts and paintings, relax in a gorgeous atrium, and treat yourself to a double dose of traditional Moroccan architecture.

The Épices Of Life

Head back south through the souks to sip a soda, a coffee, or a sweet mint tea at Café des Épices, the terrace of which offers a scenic perch for watching the spice sellers and basket weavers in the square below. In need of a mid-day snack? The rooftop of the Bazaar Café is a peaceful and shady place to share Middle Eastern and Mediterranean-inspired tapas, a bottle of Moroccan rosé, or a sweet scoop of homemade organic ice cream.

Welcome To My House

In a city that is full of hidden oases, La Maison Arabe somehow manages to maintain an element of surprise. Perhaps it’s the slightly roughshod streets that surround this restaurant, riad, and renowned cooking school, but nothing quite prepares you for the sight of the garden patio each evening. As lanterns fill the trees and live musicians create a captivating Arab-Andalusian soundtrack, you’ll enjoy expertly crafted tagines, pastillas, and couscous in a truly unforgettable setting (reservations essential). 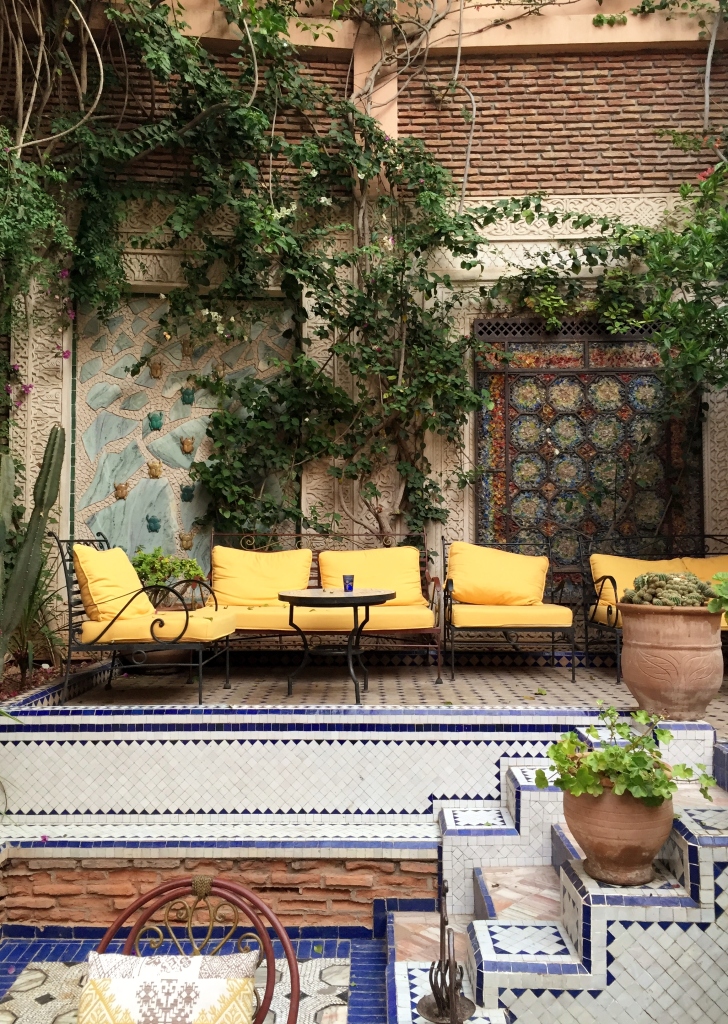 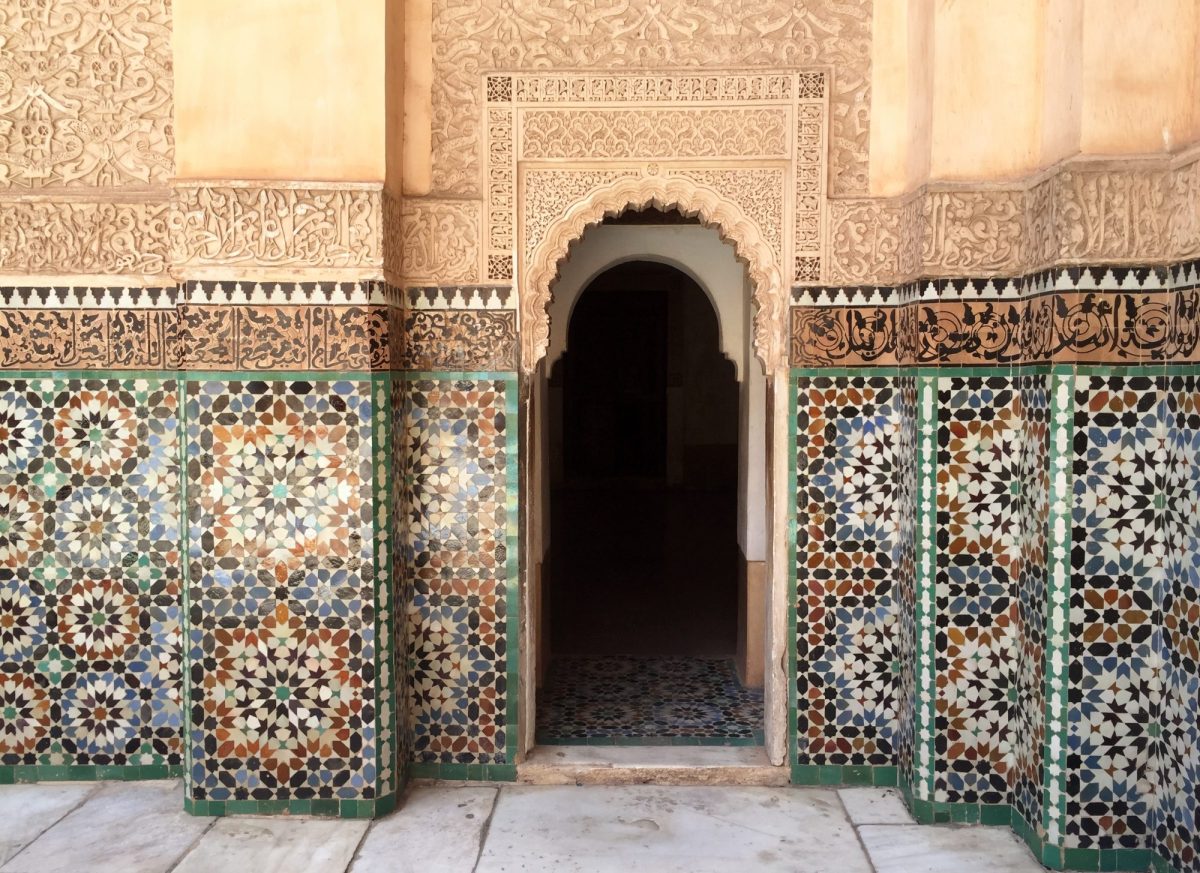 The Berber Of Seville

Between 1922 and 1962, the French artist Jacques Majorelle lived and painted in Marrakech, but his most lasting legacy was a landscaped garden that he built just beyond the medina walls in Guéliz. Le Jardin Majorelle—a lush thicket of cacti, bamboo, coconut palms, carob trees, cypress, bougainvillea, and fragrant jasmine—opened to the public in 1947 but fell into disrepair by the end of the artist’s life. Enter the legendary fashion designer Yves Saint Laurent who, in 1980, purchased the garden with Pierre Bergé. Saving this beloved space from hotel developers, the two men also transformed Majorelle’s studio into the small Berber Museum, which now showcases their personal collections of artifacts from North Africa’s indigenous people.

Choose Your Own Adventure

Use your last precious afternoon hours in Marrakech to soak in the energy of the city once more. In the mood to shop? Pick up a delicate set of tea glasses from 33 Rue Majorelle across the street from the garden or head back to the old city to revisit your favorite souk. Looking to sit down for lunch? Snag a table at Nomad to savor modern Moroccan fare that includes a tasty lamb burger with caramelized onions and eggplant. In need of some architectural splendor? Take a tour of the gardens and courtyards at La Bahia Palace, the 19th century bastion and harem built by Grand Vizier Bou Ahmed.

The Fassia And The Furious

For more than 25 years, locals and visitors alike have flocked to Al Fassia to enjoy tender brochettes, sweet-and-savory pigeon pastilla, and a roasted leg of lamb that must be ordered a day in advance. This legendary Guéliz kitchen is also exclusively run by women, creating a warm and friendly atmosphere that highlights authentic Moroccan home cooking (reservations recommended). So hop in a petit taxi, sit down with your friends and family, and make a night of it—it’s time to bid a fond farewell to the Red City.

One of the many benefits of riad living is the delicious breakfast that is usually included in your stay. Don’t bother going out—you’ll wake up to a selection of pastries, breads, fruit, eggs, and fresh-squeezed orange juice.

In the souks, a hired guide may defer some of the unwanted attention from shopkeepers, but you’d be wise to prepare yourself for some fairly aggressive sales tactics just the same. “Hi! Hola! Bonjour! Shakira! Snow White! America! Obama!” You’ll hear it all. It’s a perfect time to avoid eye contact and work on your 100-yard stare.