“Lo! Cintra’s glorious Eden intervenes
In variegated maze of mount and glen.
Ah me! What hand can pencil guide, or pen,
To follow half on which the eye dilates
Through views more dazzling unto mortal ken
Than those whereof such things the bard relates,
Who to the awe-struck world unlocked Elysium’s gates?”

In 1809, the romantic poet Lord Byron visited a picturesque village at the base of Portugal’s Serra da Sintra. Captivated by its fanciful palaces, distant ocean vistas, and wooded hillsides shrouded in mist, Lord Byron immortalized the town of Sintra in Childe Harold’s Pilgrimage, a narrative poem that would capture the imaginations of travelers far and wide.

Centuries later, the village that Lord Byron described as “the most beautiful perhaps in the world” remains enchantingly locked in time. A former retreat of Portuguese kings, Sintra is a place of dense pine forests, UNESCO cultural monuments, and open landscapes that meet the sea at Cabo da Roca—the westernmost point in continental Europe. And with its scenic position on the edge of Sintra-Cascais Natural Park, this charming respite is just 18 miles (and an easy train ride) from central Lisbon.

So take a page from your favorite fairy tale and scale the castle walls—we’re living happily ever after in Sintra (for the next two days, that is). 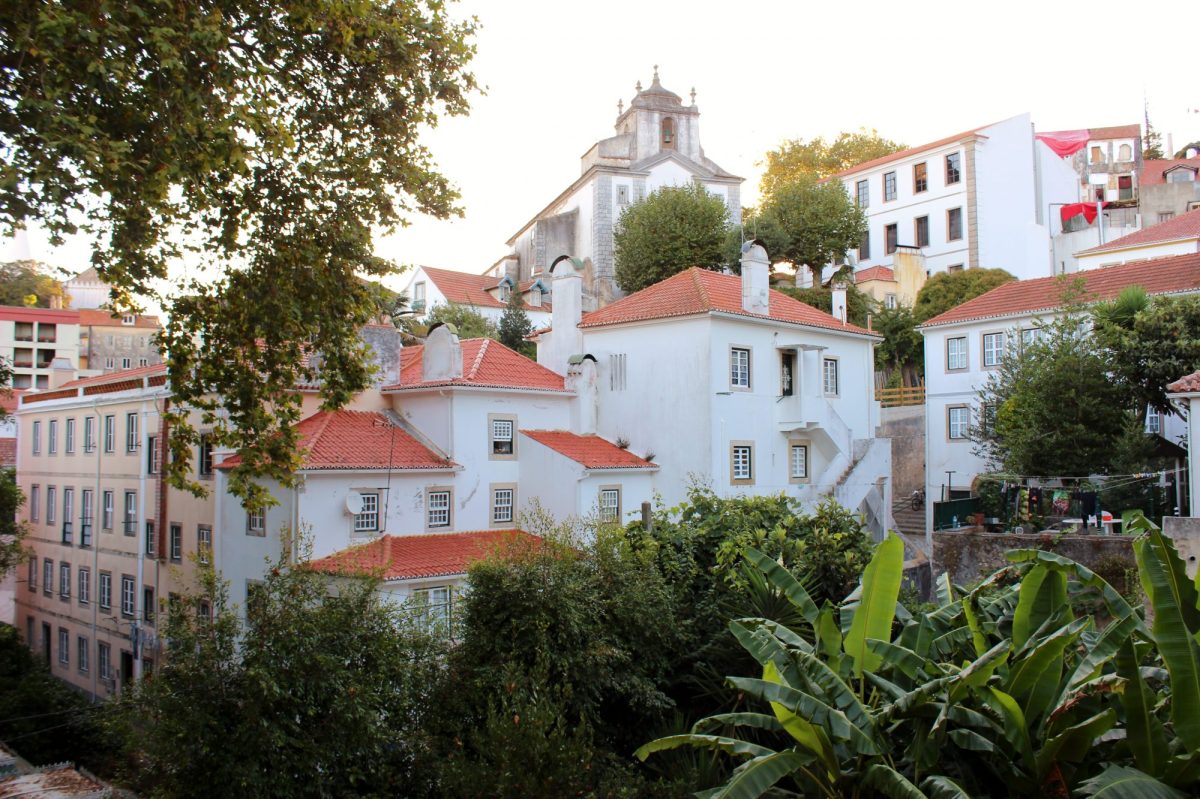 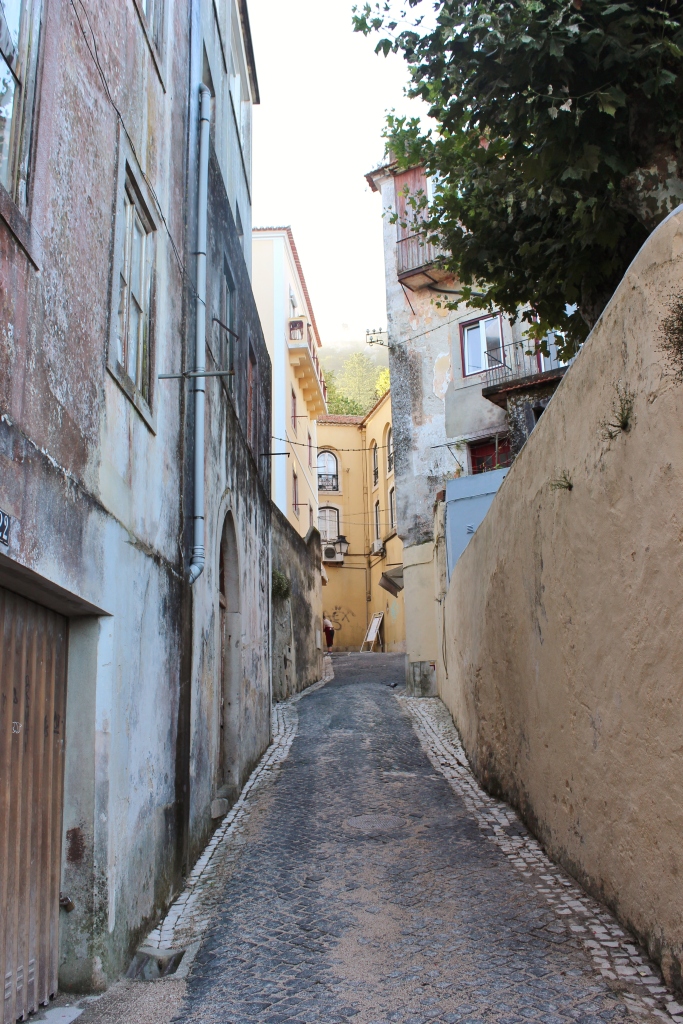 She Was A Day Tripper

For many of its visitors, Sintra is experienced in the span of a single day, with hurried trips to the major palaces squeezed between morning and afternoon trains. But what day trippers overlook are the joys of the after-hours, when the summer crowds subside and the breezy rooms of Casa da Pendôa provide a tranquil evening escape. Do your best to reserve Room S2, a light-filled studio apartment with mountain and valley views, an intimate terrace, and a dreamy position up among the treetops (Rua da Pendôa 17).

The royal presence in Sintra dates back to Moorish times, but it was King João I who built most of the National Palace of Sintra in the 14th and 15th centuries. The oldest surviving royal palace in Portugal is a unique blend of Moorish and Manueline styles, with magnificent azulejo designs and a pair of cone-shaped chimneys that define the town silhouette. Take a tour of the palace and grab a tortilha sandwich at A Padaria across the plaza (Praça da República 3)—you’ll find a seat in the shade and a terrace with a view outside São Martinho Church.

There Is A Castle On A Cloud

In the mid-18th century, Portugal’s German-born king consort, Ferdinand II, acquired an unoccupied hilltop monastery built by King Manuel I in 1511. A cousin of Bavaria’s King Ludwig II (of Neuschwanstein fame), Ferdinand set to work transforming the sacristy and chapel, building a fanciful new wing, and employing Baron von Eschwege to add a dose of German romanticism to his new residence.

Whimsical in both color and design, the red-and-yellow Pena Palace is a fantasy come to life. You’ll gaze at Cascais, Lisbon, and the wide Atlantic Ocean on a clear day—and you’ll avoid the hassle of the hilly one-way auto road if you hike the quiet trail from town. Just be sure to leave time for the 15-minute stroll to the Moorish Castle atop the neighboring hill—this 10th century fortification and its restored stone walls were seemingly designed for picnics and sunsets. 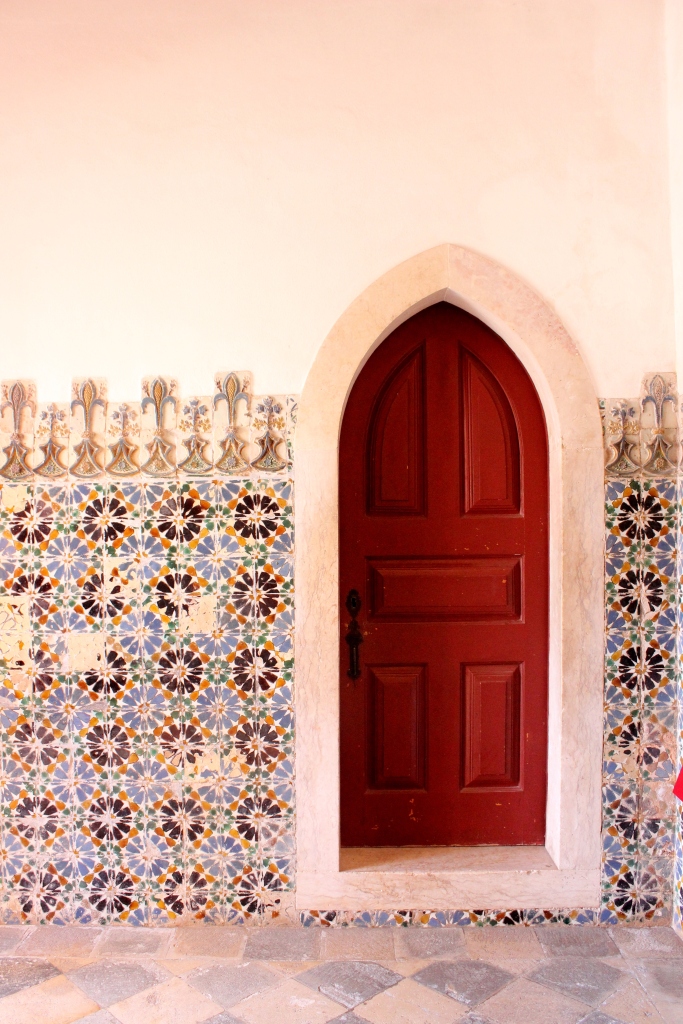 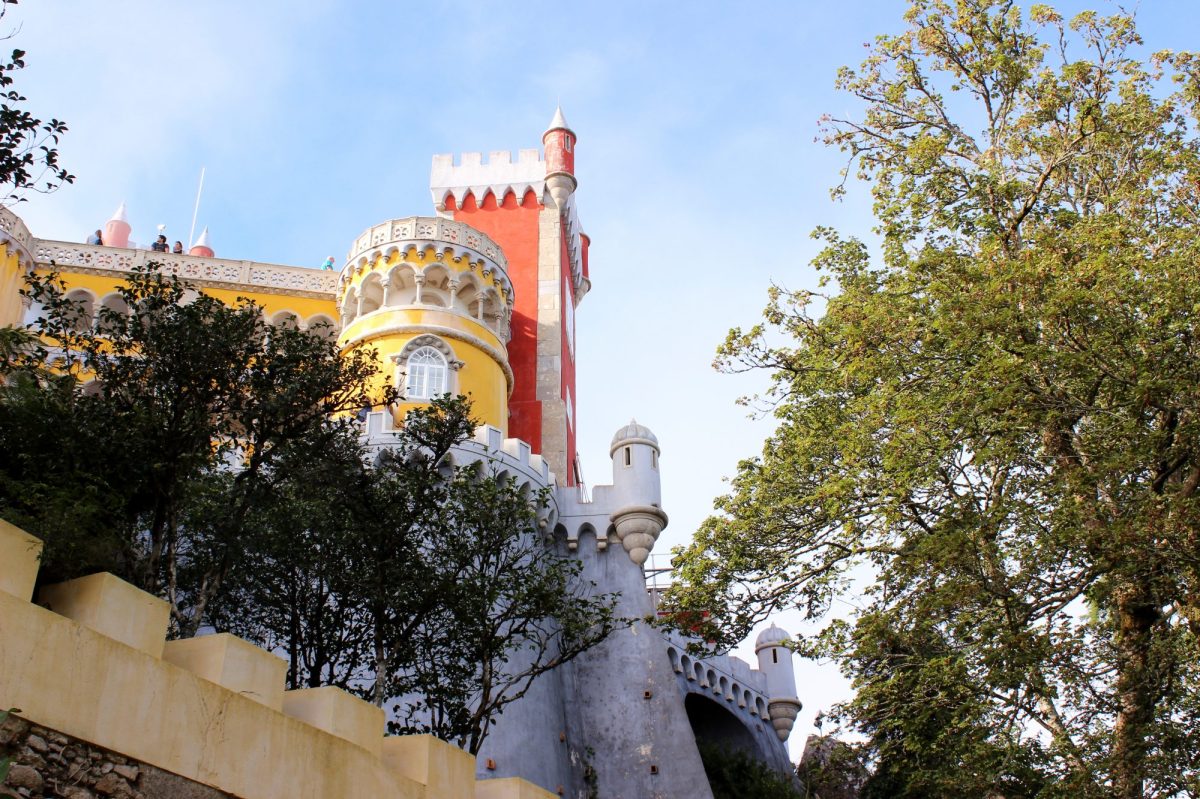 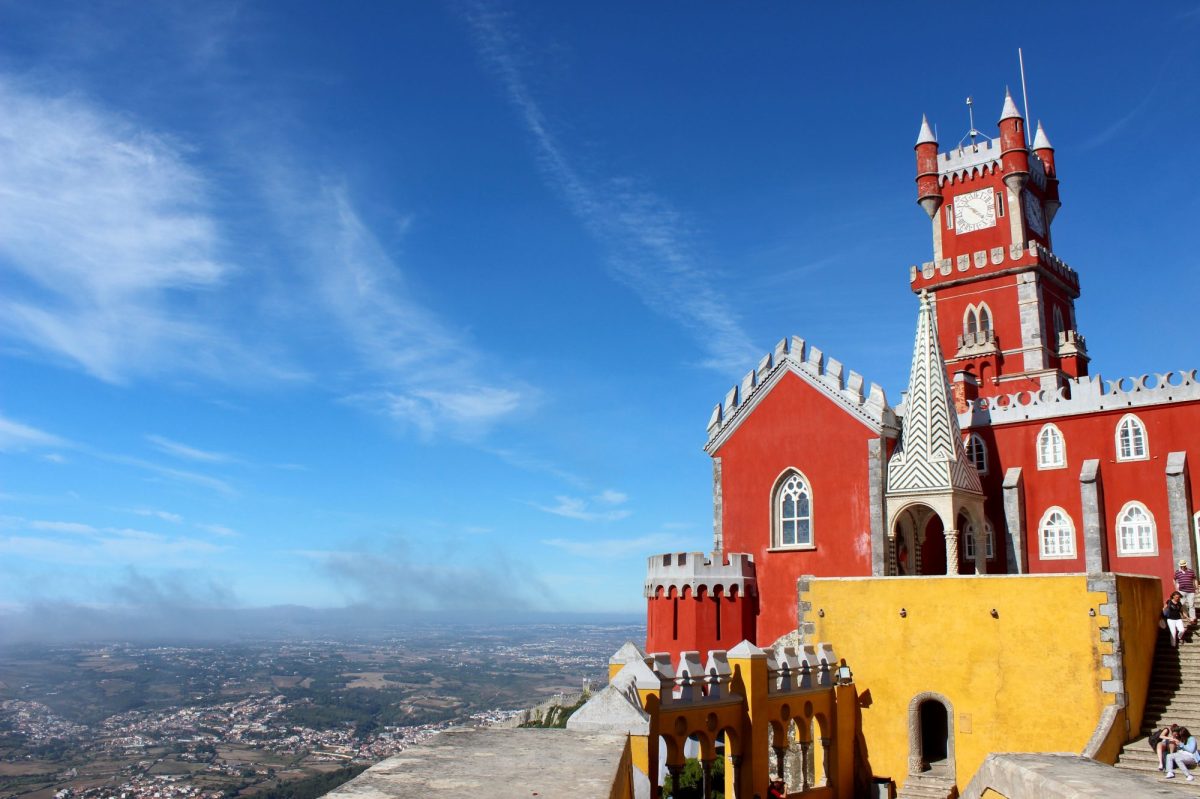 The King And I

The origins of Casa Piriquita date back to 1862, when husband and wife Amaro dos Santos and Constância Gomes opened a small bakery in the center of Sintra. But it was King Carlos I who gave the shop its name (a nickname he bestowed upon Gomes) and the encouragement to serve his favorite queijadas, a local confection of fresh cheese, eggs, milk, and sugar. Over the years, Casa Piriquita would also produce the original travesseiro, a sweet pastry of almond cream, and some of the best pastéis de nata outside of Belém. So follow your nose, begin the morning on a sweet note, and indulge in a few extra treats for today’s picnic at the beach (Rua das Padarias 1/18).

All Quiet On The Western Front

With its scarce parking and crowded roads that are alarmingly steep and narrow, Sintra can feel like a sweat-inducing nightmare for drivers in the peak of summer. But if it’s mid-September and you’re feeling confident, hop in the car and hit the coast at Praia da Adraga, a beautiful cove of golden sand just west of Almoçageme. Stake out a spot at the base of the cliffs, dip your toes in the cool ocean waves, and supplement your picnic with a few cold drinks from the beach bar.

Take the setting sun as your cue to drive southward to Cabo da Roca, the point where mainland Europe makes its westernmost reach. Here atop the granite cliffs, you can watch the sun sink into the horizon—with nothing but the ocean and a few Azores between you and the United States.

You Say That We’ve Got Nothing Incomum

It seems appropriate to end to a weekend on the road with one last dinner at Incomum, chef Luís Santos’ homage to the feeling of coming home. The seasonal risotto, seafood, and meat dishes are expertly prepared with Portuguese flair, giving diners from every corner of the globe an overwhelming sense of place. Santos’ flavors may not be those of your own home, but they will leave you certain that you have been welcomed in his (Rua Doutor Alfredo Costa 22). 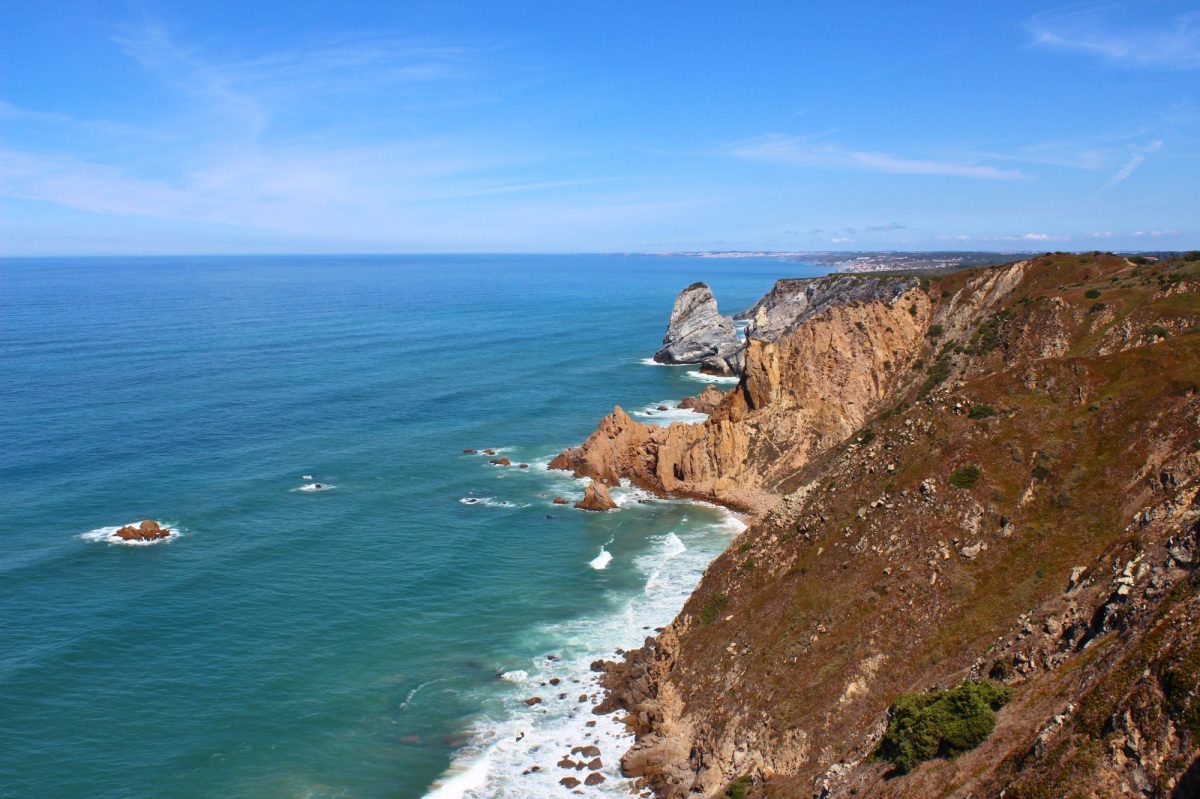