Roughly 7,700 years ago, high in the southern reaches of the Cascade Range, the 12,000-foot Mt. Mazama began to erupt with astonishing force. Over the course of several days, the volcano released a towering column of pumice and ash that reached 30 miles into the atmosphere, spewing debris across 656,000 square miles of what is now the western United States and southwestern Canada.

But it was what happened next that was truly extraordinary. As the volcano emptied its immense chambers of magma, fissures began to encircle the peak and cause the summit to collapse. When the dust had settled, all that remained of Mt. Mazama was a gaping crater that stretched five miles in diameter.

Over the centuries that followed, rain and persistent snowfall filled the hollow caldera, eventually forming the deepest (and perhaps the bluest) lake in the United States. Today, the 1,943-foot-deep Crater Lake is an awe-inspiring example of the power of nature—and one that can be admired on foot, in snowshoes, or by bike, car, or boat.

So pack your camera, pitch a tent, and prepare to be amazed. We’re off to Crater Lake for the next three days.

Although many roads in southwestern Oregon seem to lead to Crater Lake, you’ll find plenty to write home about on the 172-mile Rogue-Umpqua Scenic Byway. There’s the picture-perfect cascade of Toketee Falls (if you’re approaching from Roseburg), flakey pies packed with berries at Beckie’s Café in Prospect (if you’re approaching from Gold Hill or Medford), and summer steelhead just waiting to be pulled from the rapids of the North Umpqua River.

But really, it’s all just prologue to the wonder that awaits you at Crater Lake, where the water is somehow both impossibly blue and impossibly clear (more on that later). Take your time getting settled into a lake view room at the Crater Lake Lodge or a tree-lined campsite at Mazama Village—just be sure to catch a spectacular first sunset from the Cloudcap Overlook on East Rim Drive.

It’s the depth of Crater Lake that helps to create its almost unnatural color, as the deep water absorbs longer-wavelength red, orange, yellow, and green light, and leaves shorter-wavelength blue light to scatter across the surface. But perhaps you’re not a scientist and that explanation means little to you. You can still appreciate the optics of this phenomenon with a morning lap around the 33-mile Rim Drive. With 30 scenic overlooks and a bit of soft morning light, you’ll have more than enough to keep you busy for the next few hours.

Insider Tip: The entire Rim Drive is typically open from July through October, as winter snow removal is quite a task around here (again, more on that later). Be sure to take into account any seasonal road or trail closures when making your plans.

I Am The Watcher On The Walls

With walls that rise up to 2,000 feet above the water’s surface, the rim of Crater Lake has no shortage of beautiful views, whether you’re snowshoeing in winter or soaking in the plentiful sunshine come summer. My favorite ways to explore the rim? A late morning ascent of Garfield Peak (3.4 miles roundtrip), a lazy afternoon in a deck chair at the Crater Lake Lodge, and a golden hour stroll to Discovery Point (2.2 miles roundtrip) or The Watchman (eight miles roundtrip). 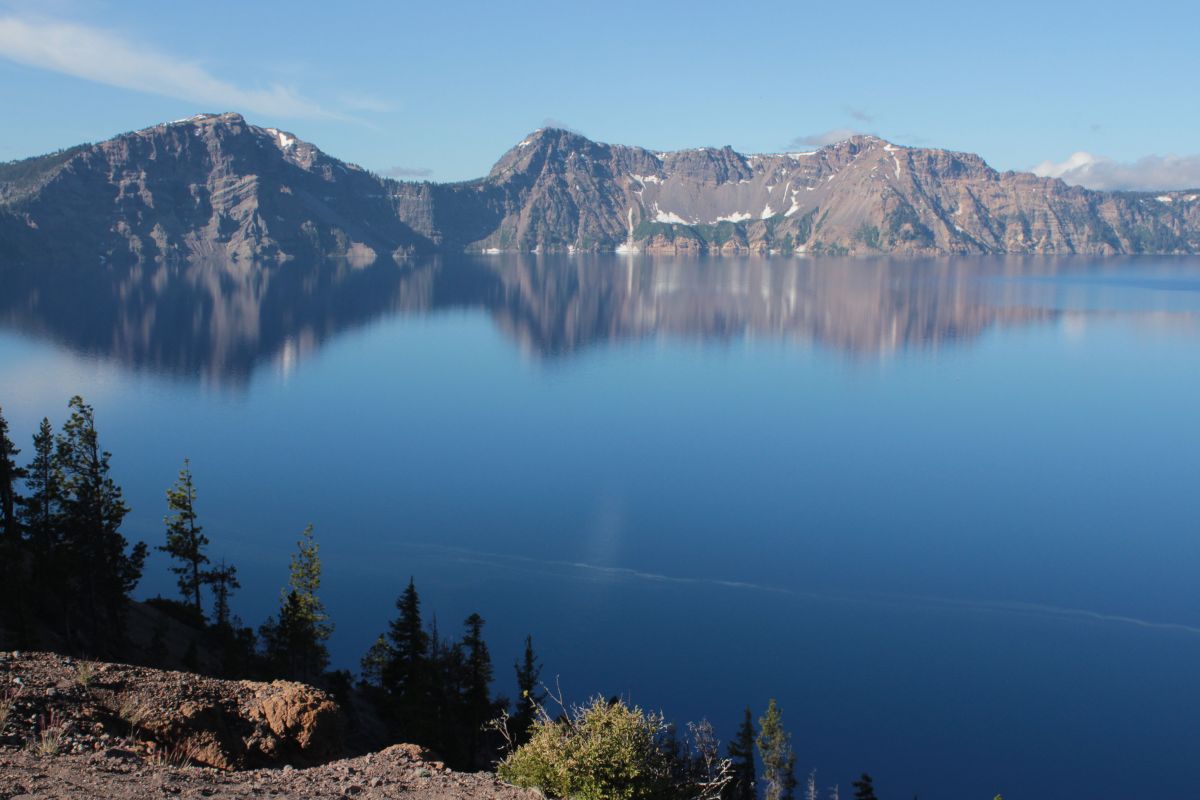 Because there are no inlets or outlets to Crater Lake, the lake is entirely dependent on precipitation as its source of water. So it’s a good thing the park averages a whopping 528 inches (44 feet) of snow per year, a sediment- and mineral-free water source that helps the lake maintain its incredible clarity.

Nowhere is that clarity more apparent than Cleetwood Cove, the only legal access point to the lakeshore which is accessed by a steep, dusty descent from East Rim Drive (2.2 miles roundtrip). You can peer down into the water from the dry warmth of the shore, steel yourself for a swim in snow-melted waters, or simply prepare for the watery excursion that awaits you next.

The peak of Wizard Island is visible from nearly every point on the rim, rising 767 feet from the surface of Crater Lake’s western waters. This volcanic cinder cone is kept company by one other island in the lake, named the Phantom Ship for its resemblance to a ghostly galleon. From afar, it’s nearly impossible to tell that the Phantom Ship is as tall as a 16-story building, made from the oldest exposed rock in the caldera at 400,000 years old. That’s why it’s a great idea to take a two-hour boat trip around the lake, with an on-board ranger spilling the secrets of the area’s storied history and geology.

The recommendations in this guide are for a summer visit to Crater Lake, but that’s not to say that winter isn’t incredibly special here. It is. Rim Drive and the north entrance road are closed all winter, but the west and south entrance roads are plowed daily, and a wealth of thrilling snow activities (think cross country skiing, sledding, snowshoeing, and snowmobiling) await.

Are you a cyclist? Mark your calendar for the annual Ride the Rim events in autumn, when the park closes East Rim Drive to allow cyclists and pedestrians to enjoy 24 miles of roadway without motor vehicles disturbing the peace.